How many MIDI instruments can be linked together?

Cabling the MIDI correctly - everything you need to know!

As soon as you start working with hardware synthesizers and drum machines, you have to ask yourself one question: How can I properly wire them via MIDI?

But MIDI in particular can cause a lot of confusion - because if, for example, two drum machines are constantly running out of rhythm, the nerves will eventually be bare (at least for me).

To show you how you can work relaxed in the studio from now on, I'll show you in this blog post how to wire everything correctly.

MIDI stands for "Musical Instrument Digital Interface" and takes care of that Communication among electronic musical instruments. These can, for example, be sound generators such as drum machines and synthesizers. Also about devices such as sequencers, keyboards and effects.

Be using the MIDI protocol no audio signals, but control information Transfer: On the one hand there is “tone-related” information - pitch, duration, velocity.

On the other hand the MIDI clock. It is the clock, so it determines the BPM and time signature.

The advantage is obvious: You can send the notes to any sound generator and edit them continuously.

For example, when you are arranging a track, you notice that the bassline doesn't really fit. You can quickly edit them via MIDI or even choose a completely different sound.

Therefore, by the way, it is generally a good idea to store the MIDI information individually in your project at the end.

In a MIDI setup there is always one MIDI master and one or more MIDI slaves. The slaves receive the note information and / or the clock from the master.

The MIDI signal is distributed via MIDI cables and the MIDI IN / OUT / TRUH sockets of the devices.

The signal from an instrument is sent out via the OUT socket.

It is received via IN and forwarded unprocessed via TRUH.

16 “MIDI channels” are available, on which different MIDI note signals can be transmitted at the same time.

The clock is sent globally and independently of the channel.

What is the best way to build my setup?

Now you can ask yourself the following questions. Afterwards you will have clarity which device in your setup should take over which function and how to correctly wire MIDI in your studio.

1. Which device should send the clock?

As mentioned above, this box will determine what BPM and time signature your project will be played with. This is best done by the device with the most stable clock generator. Either a sequencer, a drum machine or an extra clock generator. In this blog post you can find out why the clock of a DAW usually cannot do that.

2. Which device should send the MIDI notes?

From here the MIDI notes are sent to your synthesizer. So it has to be a device with a MIDI sequencer. This can either be the clock master at the same time, or it can receive and forward the clock from another device.

For the sake of understanding, here is a brief definition of a sequencer: It saves note commands and can later send them to other devices. In contrast to drum machines, most synthesizers do not have a built-in sequencer and therefore have to be connected to one.

Of course there are exceptions, such as the Roland SH-101. This synthesizer already has a sequencer on board.

3. How should the MIDI notes be fed into the sequencer?

So that the keyboard of the synth no longer directly controls the sound engine of the synth (because this is now done via the sequencer), there is the command "Local Off" on the synthesizers. Only the keyboard should be disconnected - the controls for the sound engine should still work. Here the emphasis is on “should”, because unfortunately some manufacturers do not adhere to it. The best thing to do is to ask support if you have any doubts.

Important to know: There are merger and chest boxes with and without their own power supply unit. Those without a power supply get the voltage they need directly from the MIDI cable. However, not all manufacturers adhere to the voltage required for this. For example the instruments from Dave Smith Instruments. And that even though he developed MIDI - well ...

I personally like the MIDI boxes from MIDI Solutions

In theory, you can pass on the MIDI signal endlessly via the Truh sockets on the devices. This is called Series cabling. However, there are audible and noticeable delays (latencies). The rule of thumb is: Do not connect more than three devices in series. Because of the delays, MIDI works best Star-shaped wired. So from an OUT directly to an IN. 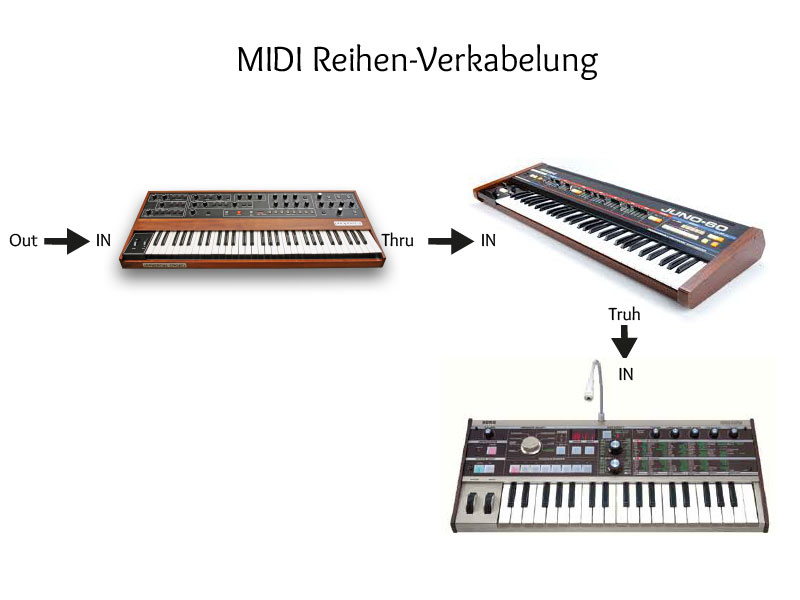 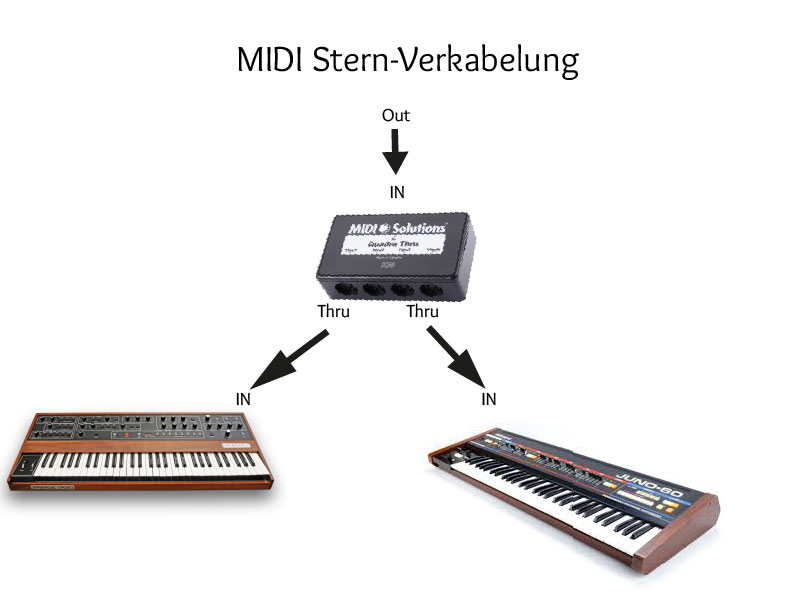 When connecting you have to make sure that no MIDI feedback loop can arise. This happens when a device receives the same signal that it issued. If you still get a feedback loop, it makes sense to switch off all devices briefly and “restart” them, as they will be quite confused by the feedback.

In my case, a synthesizer had difficulties correctly storing the sounds after a feedback loop and only after a "restart" was it really ready for use again.

By the way, you can also remotely control your synthesizers with MIDI. The catchphrase is MIDI CC. For example, you could let your sequencer control the filter cutoff of one of your synths. This can be used to create very interesting patterns. You can find the assignment of the individual CCs in the manual of the respective synthesizer.

Conclusion on "wiring the midi correctly"

Although the topic can be a bit confusing at the beginning (here I just assume you are), it is relatively logical and over time I had experienced all the problems and can now work around them. I am sure that after reading this article and doing a little practice, you will become a master in the subject of “correctly wiring MIDI” 🙂

Did this article help you? Yes? Then maybe you can already imagine what it could be like if I were supported you directly. I can do that, for example, by letting you coach and your Mixdowns take over for you. Click here to learn more about it.

What is your experience with cabling MIDI? Have you wired your studio in a completely different way than I did and are still happy with it? Share it with us in the comments!