Every year when it snows, veterinary practices are full of cases of snow gastritis. This is the absorption of snow, which leads to inflammation of the stomach lining (gastritis). Whether it is catching snowflakes, which some dogs love as a game, or a hearty bite into the cool white, not every dog ​​can handle this and it can have painful consequences.

Basically keep all substances harmful to dogs, including road salt and antifreeze, inaccessible to the dog. Many dogs lick their paws after or during a walk and thus take up road salt in winter (the former can be prevented by washing off the paws after the walk, with the latter, licking should be strictly forbidden by no or off). Road salt usually consists of table salt and minerals. Even if it is not poisonous in small amounts, you should exercise caution, because some road salts as well as antifreeze or coolants contain ethylene glycol, a sweet-tasting and odorless substance that is almost tempting for four-legged friends and is highly toxic even in the smallest doses. About 30 minutes after ingestion, the alcohol it contains takes effect, after 36-72 hours the conversion into glycolaldehyde / glycolic acid / oxalic acid begins. Symptoms can be intoxication-like states such as staggering, drowsiness, irritation of the mucous membranes, vomiting, shock or coma or seizures, cooling down and, in the worst case, kidney failure (first more urine production, then decrease in urine production). If you have observed your dog taking in coolant and antifreeze, please go to a veterinary clinic IMMEDIATELY! 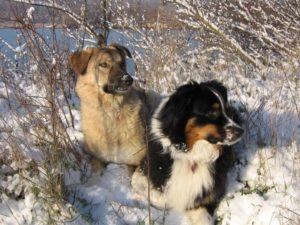 Symptoms of snow gastritis can include:

- Let dogs fast for one day

- Light food (for example Moro carrot soup, boiled fish fillet or chicken with rice or boiled potatoes that have been cooked mushy for over an hour), you can find the recipe for the carrot soup here: https://www.tierheilpraxis-kraeutertierchen.de/tipps-tricks/ernaehrung/ morosche carrot soup)

- Herbs that have a soothing effect on the gastric mucosa, such as marshmallow root or slippery elm, it is important to mix the powder with cold water and give it 2-3 times a day between meals

- lukewarm fennel or chamomile tea to drink, if your dog doesn't like tea, make sure that his drinking water is not cold but at least at room temperature

Snowball fights with the dog should be taboo, no matter how tempting it is. Throwing balls (retrieving games) and search games where there is a risk of snow absorbing should also be avoided. It is well known that prevention is the best medicine; the absorption of snow can usually be prevented with targeted training. If your dog is training-resistant, a mesh muzzle can be used for self-protection.