How does Model UN

The aim of the simulation is to promote an understanding of international relations and their functioning within the framework of the practical exercise of international diplomacy. The structure, main topics and procedures of the NMUN committees are designed as realistically as possible and are based directly on the real models. This makes the articulation of interests and the conduct of negotiations understandable and tangible from within. Professionally prepared participation in a conference is therefore extremely time-consuming.

LMU Munich has been represented in New York since 1987. Since then, the LMU has represented a large number of different countries, from regional key players such as Brazil, India, Qatar and Cuba to permanent members of the UN Security Council such as Russia, France and China. The LMU Munich is regularly one of the most successful universities and receives awards in the highest categories (“Outstanding Position Paper” and “Outstanding Delegation”).

The simulation week in New York is carefully prepared every winter semester as part of a seminar and extensive accompanying events. The project is currently based at the Chair for International Relations (Prof. Dr. Berthold Rittberger).

The preparation
The students are carefully prepared for the simulations in an interdisciplinary, extraordinarily labor-intensive and largely English-language seminar. In the course, the structure and working methods of the United Nations as well as the politics, economy and history of the country to be represented and the "topics" in the simulated UN bodies are discussed. The students have to provide at least three presentations, two larger term papers and several smaller papers or essays.

In addition to the final simulation in New York, the delegation visits two multi-day simulations within the group and in competition with other delegations from German universities in order to practice the procedures, skillful negotiation and argumentation.

In addition to the actual course program, there is an additional framework program that includes visits to the representations of the country to be represented. The students discuss the positions to be represented in relation to the country with the "real" diplomats. In addition, there is also a rhetoric seminar in which various ways of negotiation and argumentation, as well as rhetoric tricks are taught and developed. 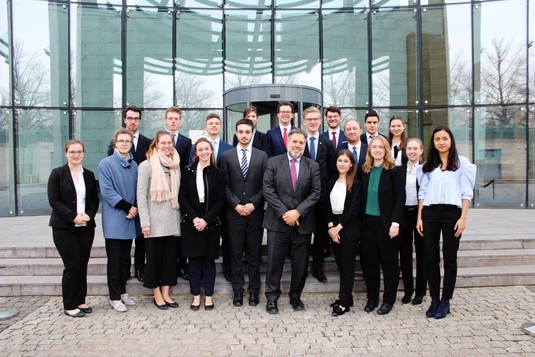 participation
Applicants for the NMUN project seminar at LMU go through a two-stage application process. First of all, a three-hour public selection exam must be written. Around 30 successful exam participants from various disciplines are then invited to an interview. The participants for the delegation are then selected from this group of applicants.

Although the project seminar is supported by numerous university and academic donors, the own contribution is currently 500 €. It includes all conference participation fees, hotel costs, course materials and the supporting program. Does not include the cost of formal attire (Western Business Attire), cost of living, and flights to New York.

recognition
Bachelor students can now take part in the NMUN project in the form of the “International Relations Advanced Module” (4th semester) as an examination. More information on this at the annual information evening and in the seminar, as well as on request from the NMUN team.