What is El Niño?

Every few years "El Niño" draws attention to itself with negative headlines: El Niño is a natural climate phenomenon that usually occurs every two to eight years - very often around Christmas time (hence the name: Spanish "das Christ Child "). It usually has catastrophic consequences for animals, plants and people and is therefore very much feared.

El Niño arises in the Pacific region between the west coast of South America and the east coast of Asia (Australia, Indonesia). There are winds here that circulate in different directions: The trade winds. They arise from a high pressure area off the west coast of South America and a low pressure area off the east coast of South Asia. In "normal" years, the strong trade winds move surface water and cause cold and warm ocean currents to circulate in this Pacific region. The cold, nutrient-rich ocean current that is located off the coast of South America is called the "Humboldt Current" and ensures a balanced climate in the ocean. The warm sea water causes plankton and many other nutrients to perish and thus worsens the basis of life for the animal world in the oceans. This phenomenon extends over the entire southern hemisphere.

In an "El Niño Year" the following happens: 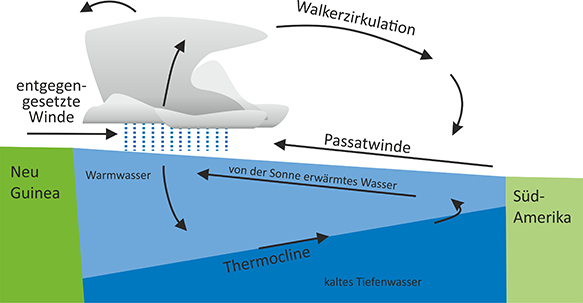 The Pacific at El Niño conditions