What was the USSR's worst war crime

The Wehrmacht and the Holocaust in the open field

DW: For a long time there was the myth of the clean Wehrmacht in Germany, based on the motto "Grandpa was fine". Why did this narrative last so long?

Hannes Heer: Millions of Wehrmacht soldiers were involved in the crimes of the Wehrmacht - in contrast to the roughly 250,000 SS men who were responsible for the Holocaust. With the memory of the Holocaust, it worked in Germany. But with the ten million soldiers on the Eastern Front killing more than 26 million Soviets, the resistance in society was much greater. Everyone had three, four, five relatives who were involved.

The second point was the Cold War. The Americans urgently needed the Federal Republic as a secure ally on the border against the Eastern Bloc. The commander in chief of the US occupation forces in Germany and later US President Dwight David Eisenhower had publicly sworn an oath that a distinction had to be made between the clique of Hitler and the Wehrmacht and that the German soldiers had not lost their honor. These statements led to the Wehrmacht generals being released from the Allied war prisons. This image was also preserved for years with the Bundeswehr, which was built up with former officers and generals of the Wehrmacht.

The writer Heinrich Heinrich Böll, for example, wrote a radical anti-war novel in 1948, which is set on the Eastern Front, but which was not printed. Siegfried Lenz's 1952 novel "Der Überläufer" was not allowed to appear. Erich Maria Remarque had to completely rewrite "Time to Live and Time to Die" and then leave it to an editor. Films have been re-dubbed, for example "Casablanca": The resistance fighter became a Norwegian nuclear physicist. Everything has been done to pretend that the Wehrmacht had only fulfilled its patriotic duty and had to pay for it with millions of victims.

You also played a part in demystifying the myth of the clean Wehrmacht - as the director of the Wehrmacht exhibition 25 years ago. For the first time, the war crimes of the regular German armed forces during the Second World War were documented for the general public. How do you look back on this exhibition today? 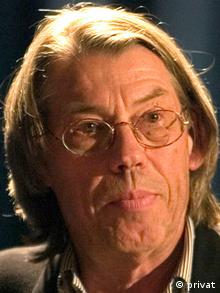 That was a milestone. There were historians who had already broken the silence with their investigations: Manfred Messerschmidt in 1969 on the Nazification of the Wehrmacht and Christian Streit in 1978 on the murder of 3.5 million Soviet prisoners of war. But our exhibition has achieved a lot more, because it used three case studies to show how it went on every day. In other words, the daily life of murder, with photos that Wehrmacht soldiers took themselves at the crime scenes.

We didn't have any other pictures in the exhibition. The perpetrators, confidants and witnesses left behind what happened on the photographs themselves. Originally, this exhibition was only intended for six months at the Hamburg Institute for Social Research. Little by little, the material grew more and more. And the exhibition was requested by all possible agencies and institutions. So the Wehrmacht exhibition became a traveling exhibition, which was not initially planned.

You have issued three case studies. Which were they?

On the one hand Belarus, the part of the Soviet Union that suffered the most, counted the most victims. Then Serbia, Belgrade Military District. The third case study was the 6th Army. The collective biography of a Wehrmacht association that was defeated in Stalingrad and carried the myth of the "victim army" well into the 1970s. In these three case studies, from the general staff down to the team level, one could really learn not only something about the deeds, but also something about the mentality of the troops.

The photographs have led to countless people coming to the exhibition, some with photo albums, to look for relatives who have not returned. Or to find the relatives, the men who hadn't told what happened then. The big story has suddenly turned into a huge family story. It reached people because the exhibition was so provocative that people began to talk and discussed critically. That was perhaps one of the decisive points of the exhibition: That the silence, which was so meters deep, was broken. 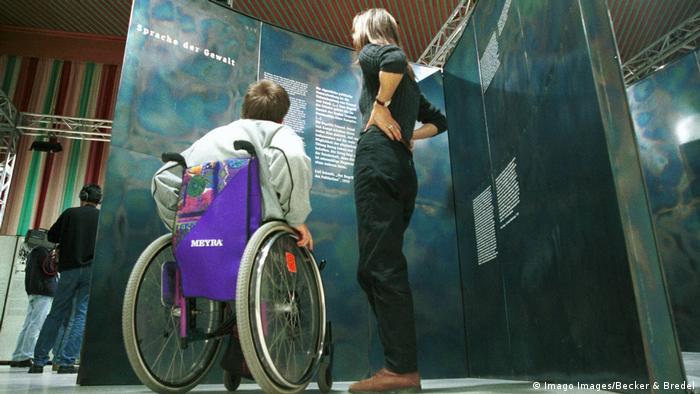 Visitors to the Wehrmacht exhibition in Saarbrücken in 1999

It was not about conquering something or creating spheres of influence, but only about smashing these societies. The Soviet Union was the center of these Slavic states, whose peoples were called subhumans. The other argument was that it was often a Jewish government. That is why a model was developed there that aimed at the extermination of the population.

Keyword Jewish government - to what extent was the Wehrmacht involved in the Holocaust?

Even before the war began, the slogan was that 'Jewish Bolshevism' must be smashed - and so must the smaller Slavic states that were under 'Jewish influence'. That was the axis of propaganda. Before the campaign began, there was an order that concerned the Jews: 'All commissioners, all members of the former Soviet government and administration and the Jews are enemies of the German people and should be exterminated'.

Then three Einsatzgruppen of the SS and the security service marched in with the Wehrmacht. These task forces were welcomed by the Wehrmacht in a very friendly manner and were logistically subordinate to them. They also had to report their planned actions to the relevant officers in advance so that no military actions were hindered. They had the order - long before the persecution of the Jews in the phase of the so-called final solution - first of all to shoot the Jewish intelligentsia, then all male Jews and later all women and children. This was the Holocaust in the open field - not the murder in the camps with gas, but in the open field with carbines and submachine guns. In this way, three million Jews in the Soviet Union (including the formerly annexed eastern Poland, editor's note) were murdered.

This Holocaust does not appear in our memory. We remember the European Jews, the deportations and the gas chambers in occupied Poland. I call this the asymmetrical treatment of war: one is thought because fewer perpetrators are involved; the other is not thought of because there were millions of relatives involved. Ultimately, it is a desolate, as yet not fully resolved topic of state and private memory. 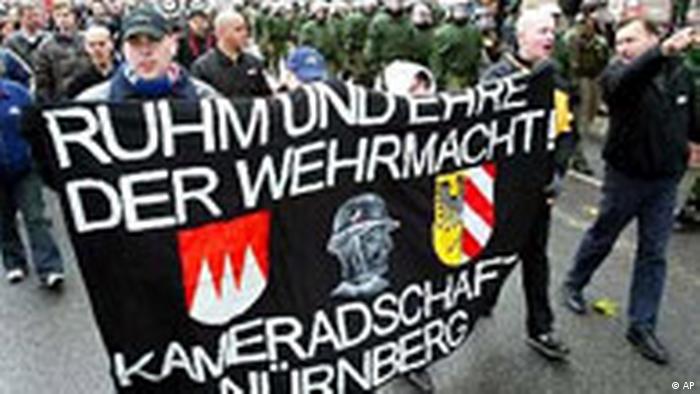 Protests by neo-Nazis in downtown Munich on November 30, 2002

Isn't that why today, 75 years after the end of the war, another exhibition about the crimes of the Wehrmacht in World War II is needed? Especially when you look at the social and political climate in Germany?

We do need a third Wehrmacht exhibition. Now it should actually be possible to organize a third exhibition again. But that would also have to be a permanent exhibition, like the memorial for the murdered Jews in Berlin. Then you could say: Yes, we have a fixed place where you can go with school classes and where you can go yourself. Also against the background that neo-Nazis openly use the symbols of National Socialism in Germany today. And there is a party in the Bundestag that says that one can be 'proud of the German Wehrmacht' and that the Nazi era is a 'bird shit in history'.

We need the awareness: Yes, our ancestors were also in the East, and they will have been involved in these crimes. That would be anchored in the family memory. And it would also be necessary in relation to the victims, who are still not remembered today. Half of the Soviet prisoners of war alone were murdered. You have to document this guilt and this admission of guilt! Only then can something like an understanding or a reconciliation take place. So far this has not existed.

Hannes Heer is a German historian and was director of the Wehrmacht exhibition. It was seen in 34 cities between 1995 and 1999 and attracted around 900,000 visitors. F.For this achievement, Hannes Heer was awarded the Carl von Ossietzky Medal in 1997 on behalf of the organization team of the exhibition.