What does the name Quorthon mean 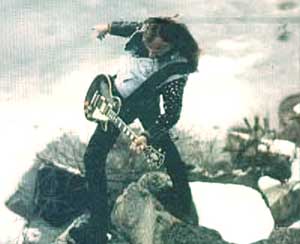 Who was he, the man whose news of death made the whole world breathless and everyone said: “That CANNOT be!”? Who was this extraordinary person who gave metal completely new directions and who was able to completely inspire several generations with his music?

Let's go back to the beginning.
Quorthon began to be interested in music at the age of 9. Together with a friend he paid homage to albums by e.g. Ozzy Osbourne and whatever else was "cool" at the time. At the age of 15, he managed to get a temporary job (as a vacation replacement) in a small record company, where he was responsible for all auxiliary work, from making coffee to sorting the LPs. But that didn't bother him, because after all it had something to do with music, and that was all that mattered to him! And the reward for this job were those hours in which he watched and heard the smell of some band recording a record or a single. This was absolutely the greatest for him at the time and very exciting every time.
It occurs to me that you will probably wonder how he got the name "Quorthon" (which, as is well known, was not his real name). Well, first he called himself "Black Spade", later "Ace Shot" (since he was a huge fan of the then famous TV "Mr. Space Ace Frehley"), and the name Quorthon (actually "QuArthon"). . Changed only for the sound) he found on a list of names of demons and he just liked it a lot.

How did Bathory come about? Well it started with Quothon and 2 of his teenage friends meeting 2 times a week for fun to play cover songs. The three really didn't give a thought to ever starting a band to make serious music. And friends who came by to listen kept telling the boys: “You will never get a record deal!” Because for the audience this was nothing more than a string of brutal noises.
But as you know, everything turned out very differently. One day the boys were in the famous wax museum of horror, the “London Dungeon”, and indeed in the “medieval chamber”. There was a room there with a large old wooden bathtub in the middle, filled with human blood. And from the ceiling hung upside down slashed female bodies (all made of wax, of course) on ropes, from which the blood dripped into the tub. And all of this by order of the then "Countess Bathory", the so-called Blood Countess. She probably hoped for strengthening and beautifying effects if she bathed in the blood of her victims, whom she had executed especially for it. The 3 boys were so overwhelmed by this (for the time) very shocking sight (and also by the many "bare facts") that they unanimously decided to get serious and name their band "Bathory". And that's how it stayed until today, as we all know. The practice and rehearsal now continued in a confident, grand style.

The first professional studio recording came about in January 1984, when Quorthon was 19 years old, for the compilation album "Scandinavian Metal Attack", a collection of various, mostly Swedish metal bands, for which Bathory wrote the 2 songs " Sacrifice ”and“ The return of the Darkness and Evil ”contributed. Although other songs were made at this time, such as “Satan my master” and “Witchcraft”, these only found their way onto a CD many years later, namely on the Bathory “Jubileum Vol. III” album as “previously unreleased tracks ".
There were also some changes in the band's line-up over time and Quorthon was always very picky, but the ones that need to be mentioned were: Kothaar (Bass 1989-1991), Wornth and Jonas "Vans" Akerlund ( Drums on the first albums).

Here is a discography of all the albums that have been released over the years:

It should be said that the recordings for some of the earlier albums mostly took place in the “Heavenshore” studios. At that time this was actually nothing more than a converted repair garage, in which a pile of tires, car parts and other things were piled up, so that the guys hardly had space for the recordings, and therefore the instruments only one after the other (but almost never at the same time) could absorb. And every now and then (due to the fact that the garage was not soundproof) you could suddenly hear the lawnmower of the garden neighbor or an airplane flying past on the tapes, so that the guys could start all over again! Sometimes Quorthon would just go to the bathroom with his guitar to have some peace and quiet! But despite these adverse circumstances and difficulties, Quorthon always looked back fondly on this time and would not want to miss it, and even believed that the authenticity of the old recordings derives from the originality of this place. I think he's right about that.
Regarding the discography, you have to add that “Blood on Ice” is a reworking or reworking of old material that was lying around on shelves for years and only reworked by Quorthon at the constant request of fans from all over the world and then was only published.

But how did the change come about, which took place from the (for those times) brutal Black Metal albums to the Nordic, epic themes?
Well, this was an easily understandable development. Quorthon simply realized that the whole thing about Satan was just a hoax, brought about by another hoax> the Church! The image of the anti-God, like the image of God, was created by the church to keep people in check and drive them into the churches (which strengthens the power of the church ... Christians). And how are you supposed to believe in Satan if you don't believe in God (at least not in Christian God)? Where one thing determines the other! And through this insight Quorthon tried to find other subjects for his lyrics. This resulted in a natural change to Nordic themes (Vikings, battles, etc.), as Quorthon has always been a big fan of history. Funnily enough, however, the topics for the first lyrics were not historical encyclopedias, but rather banal comic books that Quorthon read weekly in his Sturm und Drangzeit, namely “Chock” and “Conan the barbarian” (the many sword-swinging muscles in “Conan the barbarian ”were sufficient as inspiration at the time)!
But anyone who thinks Quorthon only had comics in his head is wrong. There was also a time when he was extremely interested in the work and life of Richard Wagner. This was also the reason why he learned German, namely to be able to read his texts in the original. He just found that a translation is just not the same. At that time he even read the same books that Wagner had previously read as inspiration for his work. And so Quorthon used both Scandinavian and German mythology for his lyrics. Things like Mjölner (Tor's hammer), Sleipner (Oden's eight-legged stallion), Hugin and Munin (his ravens) are indispensable here. And topics such as the legend of Siegfried or the “Götterdämmerung” and the sword “Notung” came from Wagner. But not only through this there was a connection between Quorthon and Germany, but also through the fact that his label "Blackmark" was still based in Berlin at that time and that he was relatively often in Germany (he speaks German very well, which he confirmed to me in our interview from January 2004). Only with the occasional dialects (Low German or Berlin, for example) did he probably not get along so well and sometimes did not understand a word.

But on a different topic!
Quorthon and the media! To this day, I wonder why Quorthon's relationship with the media was so bad for many years early in his career! Was it the pure envy of some journalists that someone with new ideas could celebrate such extraordinary success? Or was it the annoyance that Quorthon was just not willing to reveal some things about himself? In any case, the most bizarre rumors about him have been circulating over time. In addition to harmless lies like the one that he would never give interviews, there were also more blatant claims such as that he lived in a bat cave in northern Sweden and drank blood and eats babies. I don't know how much of that sort of thing really bothered Quorthon, but it definitely bothered him. Because he tried again and again to get these rumors out of the way in interviews. With rather moderate success! And so it cannot be blamed for the fact that he often deliberately used a false name as his own (as a small revenge on the journalists, who seemed to have made it their business to absolutely want to find out). And journalists fell for this fake again and again.

Years ago there was a rumor that he had died (how macabre from today's point of view!) And the first question the next journalist asked during the following telephone interview was: “Shouldn't you be dead! ? ".

Quorthon, on the other hand, has always had a much better relationship with his fans! Even when there was no Internet or computer, he regularly answered fan letters by post, and then, since the time he was connected to the Internet, Quorthon has answered every single fan e-mail personally and with devotion (I was also able to convince personally, because after the interview we exchanged e-mails for some time). And in general Quorthon never let anything come to his fans (which he always just called his "hordes") and even communicated with fans in fan forums and was happy to meet with one or the other fan in person, if they were from far away came here. It was just important to him not to lose his old fans.

In this respect, it is really absolutely understandable that his entire fan base broke out in deep mourning when the terrible news first went around on June 8th, 2004 that he had been found dead on June 7th. You can't imagine (or maybe you can) HOW MUCH I wished that all of this was just another stupid rumor! I would have really given anything so that this man could have stayed alive! I wish I could only have met him in person ONCE in my life! But all hope was in vain. Not a rumor this time, but the bitter truth! Why does it always hit the best? Quorthon really was the nicest, most charming person I've ever had on the phone in the music business. But apart from the fact that he was an extremely fine person, of course, especially as an artist, he cannot be replaced by anything or anyone!

He was the pioneer first for Black Metal (together with other bands like Venom of course) and later for "Nordic" - or "Viking" - Metal. And he never allowed himself to be confused in his ideas, he was truthful and always completely himself! As his lyrics already say:

“Nobody died for my sins
No faith tied to my name
The path I choose to walk is mine
When the clouds turn red and the horizon as in flames
My blood, my heart, my soul, my hands, my feet
My hair and eyes, my head, my lips and teeth
My arms, my legs, my cock, my choice and life
My lounges my mind till the day I die ”

Absolutely every grief and thanks to this extraordinary musician is 100% justified, because he was and is an icon of metal and will certainly become a legend. And hopefully it will stay in our hearts too. In mine for sure ...

Sources of content: www.bathory.se and own interview with Quorthon from January 2004

This is the last photo of himself Quorthon emailed me personally in January 2004 after
he proofread the interview (you can read it in the "Interviews" section):