What screams I'm a world traveler

"I am a single, walking miracle" #

Born in Vienna, displaced Jew, celebrated anthropologist and world traveler in matters of memory: About the life of T. Scarlett Epstein. 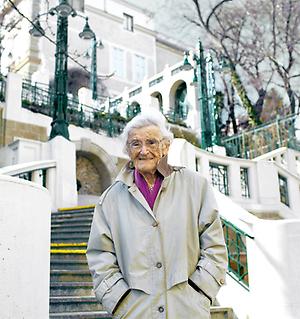 An ice-cold wind is blowing over the Strudlhofstiege in Vienna-Alsergrund. Slowly and deliberately, T. Scarlett Epstein struggles up to the first ramp in her thin dust coat, leans against the railing of this architectural jewel and smiles bravely at the camera. “You are welcome to take photos of me,” says the 90-year-old in a sonorous voice. "But I don't want to have to see her anymore."

There will be thousands of photos that Epstein has never seen. Despite her age, the eminent social anthropologist, who after the death of her husband and congenial research colleague Arnold "Bill" Epstein lived alone in her house in Sussex in the south of England in 1999, travels tirelessly around the world: as a lecturer, as an advisor to the World Bank and as one of the last eyewitnesses in the database of the London Jewish Cultural Center. “I'm a call girl”, the old lady says later in the warm “Hotel Strudlhof”. “If you call me, I'll come.” Almost every week she visits school classes at the invitation of the memorial service, telling them about the anti-Semitic furor of the 1930s, about her dramatic escape and the difficult new start abroad.

The journey here to Vienna is particularly close to her. About ten years ago she wrote to the then director of the Erich-Fried-Gymnasium in Glasergasse, describing how she and all the other Jewish pupils had been chased from the school in 1938 with great hooting. Now she was able to unveil a plaque with the names of all 120 displaced persons in the high school auditorium. “On the one hand, this act was traumatic, because I'm probably the only one still alive,” says Epstein thoughtfully. “On the other hand, I was pleased that this injustice was finally recognized.” These crimes should never be forgotten. But to forgive, she somehow managed to do that.

A miracle in view of what happened to this woman in her home country. Born Trude Grünwald on July 13, 1922 in Vienna-Brigittenau, she was not aware of her own Jewish identity for a long time. Her father, a social democratic free thinker and atheist, forbids any religious practice at home. Rather, his educational maxim is: Always tell the truth!

When the family with their two older sons and younger daughter moved to the new Karl-Marx-Hof in Heiligenstadt in 1930, Trude, then eight years old, experienced for the first time that she was obviously different. “Saujüdin!” Shout her primary school colleagues in chorus. "I felt like someone charged with a crime he never committed," she says, not far from the horror of yesteryear. “I swore to myself: If I ever have children, I will insist that they have a Jewish identity. Then at least they won't be as shocked as I am if something similar happens to them. " 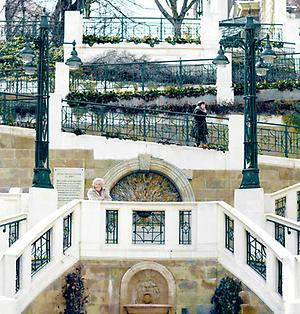 And a lot happened in Vienna back then: on February 12, 1934, Trude Grünwald saw her first death in front of the Karl-Marx-Hof. And at the Erich Fried Gymnasium, which she fought hard for as a girl to attend, as a Jew she has to achieve twice as much as non-Jewish friends. After the "Anschluss" of Austria, the situation became even more unbearable: On behalf of her older brother Otto - her father had long since had to work for relatives in Yugoslavia as a textile agent - she was driving through Vienna on March 15, 1938, the day of Hitler's triumphal procession to the Yugoslav embassy on Schwarzenbergplatz to apply for a visa. Dressed in a "Bund Deutscher Mädel" uniform, she meets euphoric crowds on the tram. "Suddenly a woman asked me: Are you going to Heldenplatz to greet the Führer?" Recalls Epstein. “And I said: yes! That was my first lie. That's when I grew up. ”At the Ring, Trude saw Hitler's motorcade rushing past - and, like tens of thousands of others, raised her right hand. A spontaneous action for which she will later be ashamed, but without which she would have "possibly been lynched".

What then begins is an unbelievable escape story, which Epstein describes in great detail in her autobiography "There is a way" (see below): In July 1938, she and her mother leave Vienna - the brothers Otto and Kurt have already escaped to London - travels to Zagreb by train with a tourist visa in his pocket, after the visa expires, boards a steamer to Albania with his father, who is increasingly depressed, and lives for months under the most adverse conditions in the port city of Durrës. With German and French lessons, the young woman manages to give meaning to her out of joint life. The Italian consul, who became governor after the occupation of Albania by Mussolini around Easter 1939, asks for tutoring and issues the 17-year-old with an impressive document that identifies her as his personal friend. 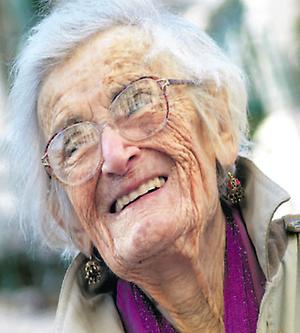 In addition to supporting other people, she has of course always maintained her own fighting spirit - similar to Scarlett O’Hara, the heroine of the film "Gone with the Wind", after which Trude Grünwald named herself after her arrival in London. For years she had to work as a seamstress, but in the evenings she attended a course in human resource management, later studying economics and political science in Oxford and finally development economics and anthropology in Manchester. A week before her final exams, she sustains severe burns from a defective radiant heater: Stubborn as she is, she takes the exam in the hospital - and receives brilliant grades.

No more fear, but big dreams #

Great moments of happiness followed by deep crises: This is how it often happens in T. Scarlett Epstein's life. As a trouser-wearing pioneer in social anthropology, she sets standards with her participating field research in South India and Papua New Guinea and has a fruitful love and work relationship with her husband Bill Epstein. But she also suffers countless miscarriages until she adopts a girl and gives birth to a second one herself; and she almost dies of cancer.

“Basically I am a single, walking miracle” says the multiple grandmother today in her home town of Vienna, where she has felt more and more at home since her first return in 1952. At her age she is no longer afraid, but she has persistent dreams: that religions may treat one another with respect; and that the horrors of history will never be forgotten. “Everyone asks me why I don't put my feet up and just enjoy the time I have left,” she writes at the end of her autobiography. "But they do not understand that I know nothing else than to be on the way." 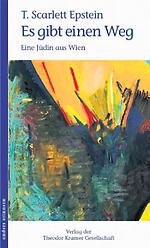 Happiness and hardship for more than one life

“I would never have thought that my life's path could be so rocky”, writes T. Scarlett Epstein in her autobiography “There is a Way”, which was published in 2011 by the publishing house of the Theodor Kramer Society. "At first it did not occur to me that gender, religion or race could hinder my rightful path, nor could I imagine the twists and turns that my life took." This life against all the chaos of fate comes in the title of the English original edition 2005 ("Swimming Upstream. A Jewish Refugee from Vienna") expressed somewhat better than in the German translation by Katharina Laher. But also in the German edition, Epstein's keen intellect, observation and linguistic versatility are revealed. A moving read that overshadows any fiction in terms of drama. (ie)