How is the Federal Reserve System organized

Fed: What about the largest bank in the world?

Correct monetary policy is of immense importance. We look behind the structures and functioning of the Federal Reserve Bank "Fed".

The American Federal Reserve has had to cope with many storms and economic crises; it is considered the bulwark of the American financial and economic system. But their structure is complex, almost mythical. It differs significantly from the European Central Bank. To many investors, some monetary policy measures and market operations often seem like a book with seven seals.

The structure of the Fed is complex, as public bodies and decision-making structures go hand in hand with private institutions. The Fed consists of the Federal Open Market Committee (FOMC), the Board of Governors and the twelve regional Federal Reserve Banks.

The Board of Governors reports directly to the US Congress. The President of the Federal Reserve is proposed and appointed by the US President. There is a possibility that Fed President Jay Powell, who took up his post in February 2018, will remain in office for up to 14 years.

The Board of Governors is practically the central bank management. It functions as the highest federal authority, as it is responsible for the central supervision. The body consists of seven full-time members and five others who are appointed by the twelve regional Federal Reserve Banks.

Monetary policy statements are made at the regular meetings of the FOMC. In March, the central bankers decided to support the financial system and thus ensured more stability on the stock and credit markets through various measures.

The specialty of the American central bank system are the financing private banks, which each acquire shares from one of the twelve Federal Reserve Banks (FRB). These shares in the FRB are not tradable. The membership of the private bank - in its assigned region - is established by law. Unlike in all other central bank systems in the world, these private banks have to maintain capital buffers so that they can participate in the capital increase of their FRB when necessary, and inject additional money. The FRB's job is to put the Board of Governors' monetary and credit policy into practice. 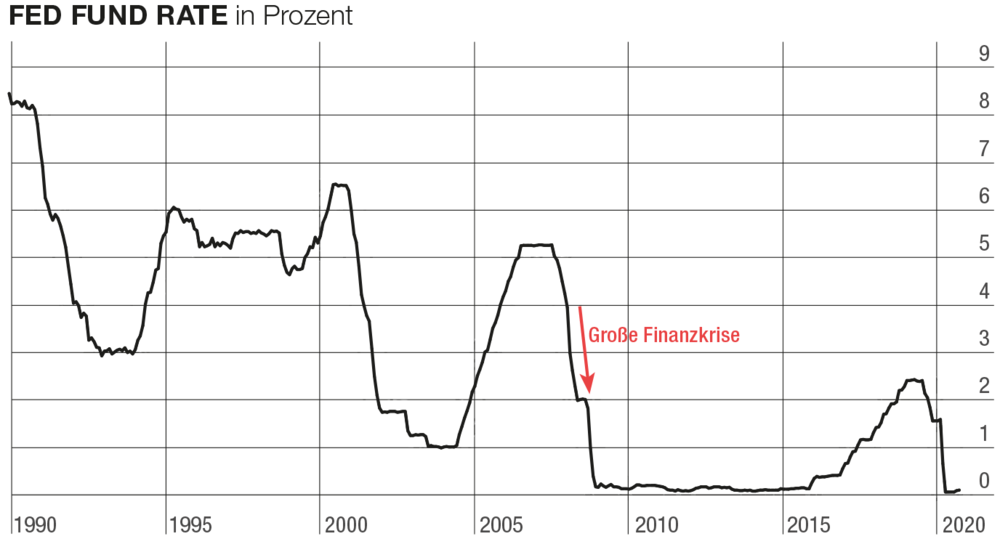 From autumn 2007 the FOMC had to secure the survival of the economy with several key interest rate cuts. Corona forced the Fed to take radical measures again in March 2020. Source: Board of Governors of the Federal Reserve System (US)

The central bank controls the general level of interest rates for the entire economy through the level of short-term interest rates. Banks and other financial institutions perceive an increase in this interest rate - in the USA this is referred to as the Fed Funds Rate - as a direct shortage of liquidity, the increased borrowing costs are directly noticeable among banks (so-called interbank market) and when lending to companies.

In other words, if the FOMC rises too quickly in Fed funds, it can act as a brake on the economy. Thanks to the strong international network of economic and capital systems, the Fed determines the global interest rate. Many experts see them as setting the pace.

The most important thing besides the Fed Funds Rate is the Fed's outlook with regard to the employment situation, inflationary developments and the stability of the entire financial and economic system. As a rule, the Fed is free to shape its policy - not so during the tenure of US President Donald Trump. In the past few years, the latter has often expressed displeasure about the board's interest rate policy and littered the members with harsh verbal attacks. In the long-term picture, the Fed has cut the Fed funds down from around eight to zero over decades.

By setting the interest rate level, the Board of Governors actually determines the lending rate for private households and companies. At the same time, the committee also controls the interest rate, be it with a medium or long-term term, for which the American state can obtain loans. So fine-tuning the Fed through securities purchases is becoming more and more important. Since it is allowed to act as a buyer of circulating Treasuries (government bonds), it supplies the entire financial system with liquidity. This gives the financial institutions important leeway for other business deals.

The Fed makes large purchases in difficult phases, so that the banks boost lending so that the supply of money remains secure and the economy does not come to a standstill.

The most recent example is the courageous intervention in the worsening of the coronavirus crisis, when the Fed decided in mid-March to buy government bonds, corporate bonds and funds in order to inject even more liquidity into the banking system. In addition, the Fed funds were effectively driven to zero.

The Fed's numerous measures have also brought it criticism. No expert can give the relevant answer on how to get out of the interest rate trap. It is said that the central bank may only cautiously raise interest rates after Corona. 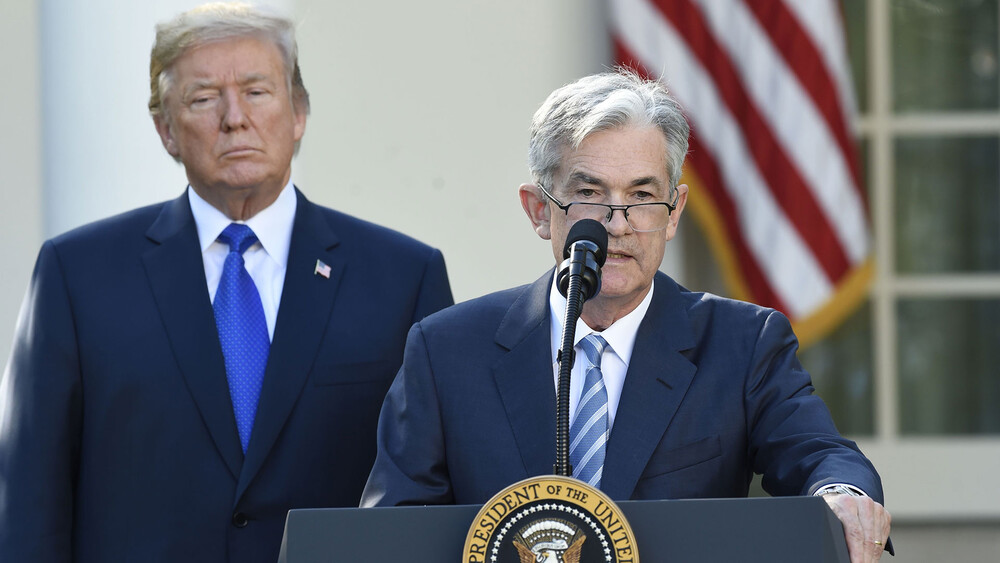 Jay Powell (right) speaks on his nomination for Fed President. In the background: US President Donald Trump with a critical face.

The central bank's total assets have continued to rise, but the Fed is convincing with its crisis management. The low interest rate policy, even if exposed to harsh criticism here and there, ultimately ensures stable development of assets and is a positive fuel for the global stock markets.

This article was published in DER AKTIONÄR No. 37/2020, which you can download here as a complete PDF.

“Tech stocks always go up!” “Real estate prices never go down!” Is that really true? Whether true or not, such narratives, or more simply stories, have a massive influence on people's behavior and thus on the economy. How are narratives created? How do they go viral, how do they gain influence, when do they lose it again? What are the effects? And, last, but not least: How can they be used to better understand and predict economic relationships and developments? Nobel laureate for economics Robert J. Shiller examines these questions in what is perhaps his most important book.