When were hotels built?

The history of the hotel industry

Today it is impossible to imagine any cityscape without hotels and enable a comfortable stay in the most remote corners of the world. The hotel industry is a comparatively young industry. But it was a long way to get to the hotel as we know it today.

Still in In the 17th century, travelers usually stayed with their own kind. Noblemen stayed in the castles of their peers, monks in monasteries, merchants in the trading establishment and craftsmen with their fellow guilds. Those who could not find such accommodation, mostly people of the lower class, stayed in inns that rented out furnished rooms, but mainly specialized in catering for their guests. Often they had Hostels, which lay on the much-frequented travel routes, over a large bed room lined with straw, for which it is best to wear a calfskin so as not to be exposed to the bugs without protection. Even a single guest room was often in no better condition. Bed bugs are a part of every overnight stay and the guest could be happy about a night tableware under the bed. Nevertheless: The establishment of the stagecoach in the 18th century, which made traveling a little more comfortable, encouraged people to travel and there was a need for more accommodation. In Germany alone, the number of inns increased to 80,000 in this century. Since comfort often fell by the wayside, the idea of ​​well-kept, standardized accommodation when traveling must have met with great approval under these circumstances.

The first hotel in the world

According to tradition, it was the hairdresser David Low who opened the world's first hotel in London's Covent Garden on January 25, 1774, calling it exactly the same "Grand Hotel". The word "hotel" comes from French. "Hôtel" was the name given to the nobles' townhouses in which they administered their lands. Originally the word goes back to the old French term "hostel", which means "accommodation facility". David Low took up the name for his newly opened house to suggest that travelers could stay there as elegantly as in the city palace of a nobleman. After all, the hotel was actually in a manorial house and offered a lot of comfort for the conditions at the time. Each room was equipped with a heating stove in which pleasant smell essences simmered. The beds had down comforters, and thanks to a wooden cupboard in each room, guests could even take a bath. 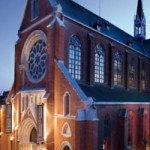 It is said that David Low, as a hairdresser, had heard so much about the troubles of travelers that the idea arose of making money with a well-kept overnight house without bugs and unpleasant smells. And in fact, this idea met with so much response that soon even the nobility preferred to stay in a comfortable hotel rather than in the draughty castles of their relatives. It is also known from Kaiser Wilhelm II, for example, that he always preferred a well-kept hotel to a castle and paid the “Adlon” 150,000 marks a year so that he could always accommodate his guests there.

Yes, though David Low as the world's first hotelier laid the foundation for a flourishing business, he did not get rich himself. It is said that he was too generous with his money for advertising purposes, so that he was soon broke and a certain Mrs. Hudson was running his hotel. He started working as a podiatrist, because while working as a hairdresser he had also noticed that travelers often suffered from foot complaints such as corns, before he ended up in the poor house and then on the street. However, the concept of the hotel persisted and eventually gained tremendous commercial importance in the course of the 19th century.

The hotel boom in the Belle Époque

Today, the period from around 1884 to the outbreak of the First World War is referred to as, during which a dynamic economic upswing ensured enormous prosperity in Europe. The bourgeoisie in the metropolises benefited from industrialization and the associated structural change in society. In the cities, art and culture developed at a surprisingly rapid pace, the railroad ensured extensive transport networks, more free time and greater financial capacities led to a considerable increase Increase in pleasure travel. The tourist infrastructures grew, tourism developed more and more into a new service industry.

In addition to Switzerland, which was the most popular tourist destination at the time, the cities in which the world exhibitions were held were particularly popular. London, Vienna, Paris, Berlin - cities in which countless representative buildings of the entrepreneurial bourgeoisie were built at that time. In these Construction boom There is also the construction of numerous hotels that are still some of the most beautiful in the world today. Outside the cities, in remote areas, splendid hotels with a castle-like character were also built - Spa hotels, in which the wealthy classes spent their summers, enjoyed great popularity.

At the beginning of the 20th century, hotels became more and more important to society. The number of beds increased continuously. Large-scale facilities such as the Vienna “Grand Hotel” with 600 beds, the Berlin “Central” with over 1000 or the double hotel “Waldorf-Astoria” in New York, which provided over 2500 beds, became more and more commonplace. In Lucerne (Switzerland) alone, the number of guest beds increased tenfold between 1860 and 1915 - from 870 to 8,600 beds. In 1927 the hotel "Stevens" opened in Chicago, which for a long time had been the Record number of beds held. Today, hotels with several thousand rooms are no longer uncommon. The largest hotel in the world is currently the “Venetian Resort Hotel” in Las Vegas with over 7,000 rooms.

After the hotel boom in the Belle Époque, the early tourist inns were finally a thing of the past and gave way to huge, comfortable hotels. But what makes a hotel such and what distinguishes it from an inn and other forms of accommodation?

What makes accommodation a hotel?

According to Duden, the hotel is a "commercial establishment with a certain level of comfort, in which guests can stay overnight or stay for a certain period of time (during their vacation) and are fed". Since boarding houses and guest houses are also used for overnight stays and catering for guests, the focus when defining the hotel must be on the "Certain comfort" lie. Accommodation must therefore offer a minimum level of comfort in order to be considered a hotel. In Germany, for example, there is a very specific catalog of criteria for the German Hotel Classification, which specifies how the equipment, space, service, leisure activities and, if necessary, conference area must be designed to meet a certain hotel class. The classification is known by Hotel stars expressed:

Basically, it can be said that, in contrast to an inn, a hotel today is less designed for a stop on the way than it is to represent the destination itself. Numerous leisure activities from sport to wellness seduce you to spend your entire holiday relaxed in the hotel. The classification of the hotels serves to improve transparency for the guests in view of the number of offers. At the same time, thanks to the classification, which is voluntary, the hotels have the opportunity to stand out from the competition and improve their sales opportunities. However there is no internationally uniform standard, each country classified according to its own criteria. In Germany, these are set by the German Hotel and Restaurant Association (DEHOGA). This was founded in 1949, shortly after World War II, after all previous hotel organizations had collapsed. The merger of the industry also led to an increasing standardization of the hotel industry.

Standardization of the hotel - creation of chains in the USA

Global hotel chains as we know them today have their origins in the USA. As early as the 1920s, massive hotels were being built in major American cities and holiday centers. Perfectly organized hospitality and standardized beds reflected the breakthrough in the mobile consumer society of the American way of life. The American hotel industry masterfully demonstrated how to treat the customer as king even in the crowd and thus achieve success. Standardization continued to increase after World War II. Hotels increasingly became chains controlled from a head office. These chains still exist around the world today and new ones are being added all the time. The advantages are apparent. The guest can feel at home anywhere in the world and the same standard that he can rely on awaits him everywhere. A disadvantage of the standardized chains is the reduced individuality and authenticity when experiencing a new place. But for everyone who appreciates uniqueness, there are still enough small hotels that make an authentic stay possible anywhere in the world.

The hotel industry has never been as diverse as it is today. Hotel operators react to the different forms of tourism and offer anywhere in the world Hotels for every taste and every price range at. From luxury hotels for well-heeled travelers to inexpensive hostels for backpackers, from minimalist hotel chain concepts to creatively designed art hotels, everything is there. The customer is king and can freely live out his individual travel wishes thanks to countless offers - as you can see on hotelspecials.de, the possibilities are almost unlimited.

The history of the hotel industry was last modified: April 25th, 2017 by Redaktion

Schrijf ever in ontvang net than 600,000 other than the first de best hotel deals 3 keer per week in jouw inbox.