As can be seen from the structure of plastics, they are polymers. This means that plastics are macromolecules that consist of several repeating basic units, the monomers.
There are three basic possibilities for the formation of a polymer: These development possibilities differentiate the three groups of polymers,
the natural or also biopolymers, the semi-synthetic and the synthetic polymers.

Beetle with a chitin shell
Natural polymers have always been found in nature, everywhere. As DNA and RNA (nucleic acids), they are fundamental building blocks in the genetic structure of all living things. Proteins that take on important tasks in the body are also polymers, as well as carbohydrates (polysaccharides) such as cellulose (in wood and paper), starch and chitin. DNA and RNA, both nucleic acids or nucleotide chains, are only created through replication of an existing DNA or RNA strand. This can be explained by the fact that the genetic information stored on these molecular strands would otherwise be arranged in any order and lead to unpredictable results in development.

The proteins are produced by protein synthesis in the human or animal body. This requires a complicated process in which the genetic information of the DNA is read through the RNA and transcribed into amino acid chains, the proteins. 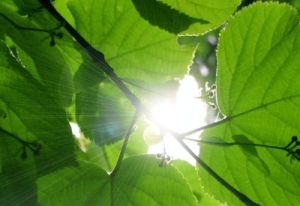 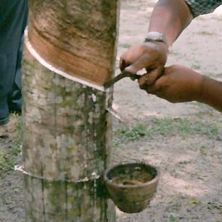 Rubber extraction
Rubber, which is obtained from a milky liquid in the rubber tree, is also built up as a natural polymer. If this liquid is dried, a natural polymerisation process takes place and the elastic material remains. Rubber was used early on because of its rubbery consistency and formed the basis for the manufacture of plastics. 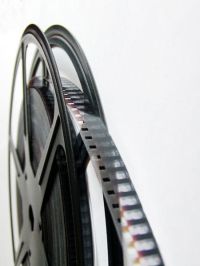 Celluloid
If one of the above-mentioned biopolymers is processed in a certain way, for example by vulcanization, a semi-synthetic polymer is created. These substances are still based on natural monomers, which can, however, be modified as required by processing. For example, in 1869 John Wesley Hyatt produced celluloid from the carbohydrate cellulose by subjecting it to heat and high pressure under certain conditions.

Bakelite hairdryer
As already mentioned, the production of synthetic polymers takes place via three different reactions: polymerization, polyaddition and polycondensation. The first controlled polymerization reaction was achieved by the researcher Leo Hendrik Baekeland in 1907. The thermoset produced by him in a heat-favored polycondensation from phenol and formaldehyde was called Bakelite and was the first synthetic resin. Shortly afterwards, the entire group of materials was christened "plastics", ie substances that could be produced artificially or artificially formed from natural substances.

Today there are more than 50 different plastics commonly used in industry. The most used are:


These six plastics make up 90% of the industrial production of plastics.
<?