What is a weird ponytail

My favorite pastime is doing hairstyles. My mother taught me how to braid a braid.

As a child I was interested in the hairdressing trade. Since that time I knew for sure: I want to be a hairdresser! On various occasions I comb my classmates and of course myself. Sometimes my hands hurt, but that doesn't matter. In this article I want to show my hairstyles.
My name is Wiktoria and I am 14 years old. I live in Ropica Polska. My favorite pastime is doing hairstyles. My mother taught me how to braid a braid. Then I made the first attempts. My mother couldn't stand it back then because I wanted to comb her every evening. I understand why she was angry. Sometimes I just pulled her hair. But these days I can do beautiful hairstyles in a painless way.

I was interested in the hairdressing trade as a child. I remember a strange situation. When I was 7 years old, I once played with my friend and cut her hair. The result was terrible, but from that time on I knew for sure: I want to become a hairdresser! Sometimes everything goes wrong and I am not satisfied with the homemade hairdressers. In moments like this I say that I will not be a hairdresser. But this occupation is my passion. I really enjoy doing that. I bought a training head for hairdressers. Now I don't bother my mother anymore. But honestly, I think it's better to comb living people. On various occasions I comb my classmates and, of course, myself. Sometimes my hands hurt, but that doesn't matter.

At school, I took part in a talent competition and received a commendation. I was very happy that other people liked my hairstyles. I dyed someone's hair for the first time during the summer vacation.

Most often I do hairstyles with braids and topknots. Sometimes others don't like my hairstyles, but I'm not worried about it because practice makes perfect!

In this article I want to show my hairstyles.

The first hairstyle: Half French braid buttoned into a braid. The model has very long hair that is also curly and thick. 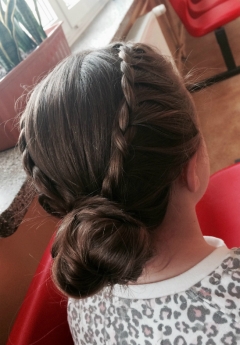 The second hairstyle: two braids were tied in a ponytail. A bow was tied from the ponytail. 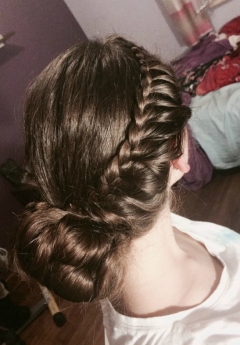 The third hairstyle: two French braids were tied in a ponytail, then two buns were made. 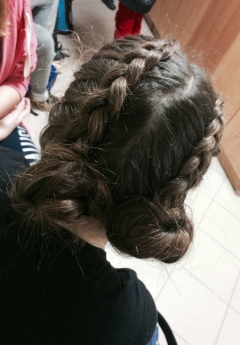 The fourth hairstyle: hair was braided into a bun. 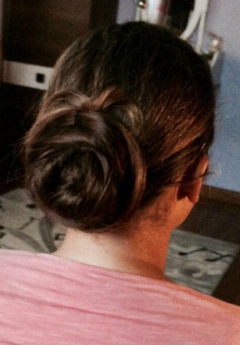