Germany is a tenant country. Over half of the German population (according to Statista 57 percent) do not live in their own four walls. In most cases there is a cable connection in apartment buildings, the monthly costs of which are allocated to all tenants in the utility bill. This is regulated by § 2 No. 15b of the Operating Costs Ordinance. However, this passage could be deleted because the front against this apportionability is great.

Above all, Deutsche Telekom is using its lobbyists to tilt the ability to allocate cable connection fees. She speaks of ancillary costs privilege for cable network operators. It is not just about the TV offer, but also about the Internet access. Since the tenant already pays for the cable connection, he has little reason to change the provider, argues the Telekom.

She is not alone in this. The Monopolies Commission also criticizes the ability to pay, which it believes clashes with the Telecommunications Act (TKG). According to the TKG, telecommunications contracts that run for more than two years may not be concluded with consumers. The term of rental contracts violates this regulation. The tenant also has no way of not paying the cable connection fees, even if he does not use the connection at all. 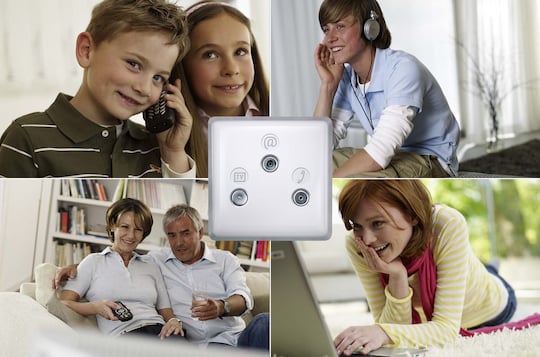 In addition to television, internet and telephony have long been offered via cable connections. For fair competition, the cable fees should not be billed via the ancillary costs, according to the DSL providers.
Vodafone The arguments are heard at the Federal Ministry of Economics (BMWi). In its key issues paper on the amendment of the TKG, the BMWi speaks of a limited freedom of choice for the tenant. In order not to have to pay for the cable and DSL internet connection at the same time, tenants would rather choose internet access via cable if this is already available, it is argued. In addition, the BMWi refers to European regulations, according to which no obstacles may exist that prevent a consumer from changing or terminating a contract.

In addition to television, internet and telephony have long been offered via cable connections. For fair competition, the cable fees should not be billed via the ancillary costs, according to the DSL providers.
Vodafone

Warning of higher costs for tenants

The Ministry of Economic Affairs wants to present a draft for the TKG in autumn. In this context, § 2 No. 15b of the Operating Costs Ordinance could be deleted. However, the cable network operators forecast higher costs for tenants if the ability to allocate the cable fees no longer applies. Network operators can offer housing companies the cable connection more cheaply via so-called multi-user contracts. Without apportionability, the cable network operators would have to conclude individual contracts with the tenants, which are more expensive. While an amount under ten euros is usually debited through the ancillary costs, the individual connection can cost up to 20 euros per month.

Since the cable connection is part of the building or apartment equipment, a single tenant cannot avoid operating costs, argue the cable network operators. Tenants on the ground floor also have to pay the cost of an elevator, even if they don't actually use it. There is also a social aspect: for transfer recipients such as Hartz IV households, the social welfare office can cover the incidental rental costs. If the ability to pay the cable connection fees were no longer available, financially weak households would have to pay more for television. Ultimately, the question arises as to who is harmed by the tenant's limited freedom of choice: the cable network operator, Telekom or the tenant himself.