How are DVD files encoded

Before we can process a DVD film any further, we first have to shovel it from the disc onto the hard drive. This must never be done with simple copying, but requires a special program. This is the only way we can ensure that only the main film ends up on the record in a coherent piece.

Many DVDs have a digital so-called copy protection called CSS, i.e. the video data is encrypted on the disc. In addition, there is often an analog counterpart called Macrovision and various digital crippling measures. All these obstacles are ridiculously easy to circumvent, but this is (not only) illegal in Germany. We will therefore use the program PgcDemux, which, unlike other rippers, can only handle unprotected DVDs.

Unfortunately, I cannot mention the alternatives without risking a warning. Clearly this is censorship in the ugliest possible way, approved by the legislature. It is also true that we actually have a right to private copying and even pay a fee for it when we buy hard drives, burners, blanks, USB sticks or a whole list of other devices and media. And no, thanks to current copy protection laws, we are often not allowed to exercise our right.

In concrete terms, this means that PgcDemux is not necessarily the most sensible and convenient DVD ripper. However, it is one of the few ways to even discuss ripping without being warned into bankruptcy by lawyer bandits who are thundering away.

The file structure of the DVD¶

A video DVD usually contains an empty folder called AUDIO_TS and an important folder VIDEO_TS, in which the complete content of the DVD is located. We are interested in two types of files in this folder. 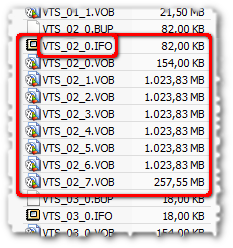 As you can see from the excerpt from a DVD file list above, most of the files are named according to the same scheme, namely vts_xx_y.zzz. It stands xx for a two-digit number that identifies a group of VOBs. So all VOBs belonging to the main film have the same thing xx. Within a filegroup, the y of 0 counted up, and zzz denotes the file extension (VOB or IFO).

The main film is in one of the VOB groups. For ripping we need to find out which one. Fortunately, that's not a problem, as the main film is the largest chunk of data on the disc and we can therefore assume that it is in the VOB group that takes up the most space. In the example shown here, this is the group with the 02 in the middle. The associated IFO file vts_02_0.ifo we copy the normal way via the file manager to the hard drive, to where the ripped film should be, and name it in vts_01_0.ifo um, since PgcDemux always VOBs with the 01 and the middle number in a group must be the same.

In order to drag the actual film onto the plate, we start PgcDemux. 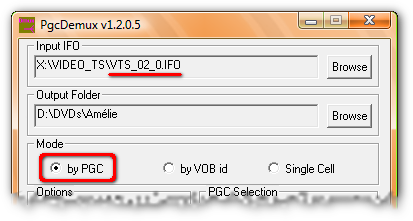 Right at the top of Input IFO, we use the Browse button to select the IFO file of the main film from the VIDEO_TSFolder of the DVD. Under Output Folder we specify the storage location for the film on the hard drive. For the complete encoding, there should be at least 10 GB free space on the drive. In addition, the PgcDemux mode of operation must be set to by PGC, since the DVD essentially consists of a number of such program chains, one of which contains the main film.

We set the remaining options of PgcDemux as shown in the following picture.

All demux options are disabled because we will do the demuxing later. For this purpose, the check mark for Create a PGC VOB is set in order to create VOBs on the disk. One file per VID must not be checked.

On the right-hand side under Domain we put on Titles and underneath we see all existing PGCs. If the combo box contains several entries, we select the one whose length corresponds to the main film.

At Angle, we choose the viewing angle of the video, if there are several. There can be multiple versions of a DVD-Video track. At Starwars for example this is used to be able to show the scrolling text at the beginning in different languages. DVDs that contain a theatrical version and director’s cut of a film are also often made using viewing angles (seamless branching). The software DVD player tells us which angle is the right one when playing the DVD.

With one click on Process! let's start ripping and wait until PgcDemux has shoveled the VOBs onto the disk. Depending on the DVD drive and the length of the film, ripping takes between a few minutes and half an hour. Then we normally have between 4 and 7 GB in several VOBs on the disk.

Unfortunately, PgcDemux cannot read the chapter information from the DVD, which is why the ChapterGrabber has to take over. We start the program and load the IFO file of the main film via File ›Open File. In the example above, that would be the familiar one vts_02_0.ifo. The information from the IFO, i.e. the time stamps, now appears in the Chapters window. 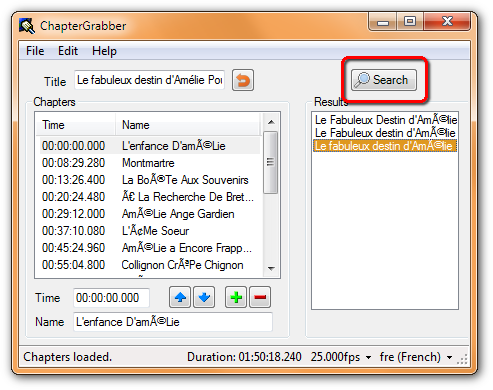 If we enter the film title in Title, we can then search for the chapter name in two Internet databases using the search button. This works very well, especially with English chapter names. Sometimes the result is not as great as you can see in the screenshot. ChapterGrabber has its problems especially with special characters. Nevertheless, it usually saves us some typing.

We save the chapter list with File ›Save. Since this is a simple text file, we can of course edit it with any text editor as we like.