Which is the best application for tracking

What "luca" does differently than the Corona warning app

What is the difference between the Corona Warning App (CWA) and "luca" when it comes to use?

After its installation, the CWA works independently in the background with the Bluetooth switched on. Users stick with it anonymous, no health department can contact them through the CWA. It is different with "luca": In addition to contact tracking, Luca also offers a kind of contact data management. Be here In addition to personal data, whereabouts are also collected. In addition, the health authorities that have linked "luca" to their system can inform the contact persons in the event of an infection.

The CWA can inform about an infection risk if infected people also use the app, have always had their Bluetooth switched on and have entered their positive test result in the app. At best, there is information about a risk of infection - so must Users become active themselves and contact your general practitioner or health department. With "luca" you can Health authorities access contact details and Inform users.

Who is behind the apps?

The CWA is that official app of the German federal government, developed by SAP and Deutsche Telekom. Behind "luca" is the Berlin culture4life GmbH and with it commercial provider. In addition, artists such as the band "Die Fantastischen Vier" and neXenio GmbH, which emerged from the Hasso Plattner Institute at the University of Potsdam, are involved.

How is the creation of movement profiles prevented?

With the Corona-Warn-App (CWA) you can no movement profiles individual users are created because neither personal data nor locations are collected. This is also the case if you agree to the newly introduced "data donation".

At "luca", the operators declare that all data is on Servers in Germany stored in encrypted form and only health authorities could decrypt the data again. Thus it is not possible that business people or the app providers can access personal data of the users. For this reason, it would not be possible to use the data for advertising purposes, for example. The entire "luca" source code is now public. The data protection officers of the federal and state governments and other data protection and security experts criticize, among other things, that all the data collectedcentrally stored become. That could leave them vulnerable to abuse. Despite some justified criticism: In view of the practical use of the app, the risk in the current crisis seems to be acceptable according to the current status.

How does "luca" work?

The app developers address various user groups. One of them are consumers. After installing the app on the smartphone, you have to create a profile once and enter data such as name and telephone number. This creates a QR code that changes every minute and is assigned to the end device (e.g. smartphone) and with which it is possible to check in at operators of, for example, bars, event venues or shops - provided they also use the "luca" app. For this purpose, the generated QR code is either scanned by the respective operator or the operators themselves provide a QR code for their location, which the consumers scan in to save their presence. This records who was with you at what time. However, according to the app operator, they cannot see the names and contact details of the scans - an advantage over entries on paper. The operators of the app explain that locations are stored for a maximum of 30 days.

As a further application example for "luca", private meetings are mentioned on the associated website. And if you don't want to install the app or don't have a smartphone, you can check in via a web application or with a key fob.

Since version 2.0 (published on April 21, 2021), the official CWA has also been offering the creation and recording of QR codes. However, the function is not comparable to the function of "luca". In contrast, the CWA still does not use any personal data. You cannot be contacted by the health department using the app. Therefore, the new function does not replace the information required in many federal states of contact details at events, in shops or restaurants.

In this article, we explain the meaning and function of the QR codes in the CWA.

What role do the health authorities play in "luca"?

"luca" is no app from the health authorities or other authorities. The operators offer, however, their application to the systems of the offices to connect. This is what distinguishes "luca" from other comparable apps on the market. In the case of a corona infection, for example, it could go like this: The responsible health department contacts the infected person, who voluntarily releases the list of places visited to the health department. To do this, she receives a transaction number (TAN). The health department asks the operators concerned of the places visited to approve the relevant visitor entries. The office can then inform all contact persons.

Politicians promote "luca" - could it become a duty?

An obligation to use is extremely unlikely, the state Corona warning app is also voluntary. But it is conceivable that hosts or organizers may invoke their domiciliary rights and demand that the app be used. The Corona Protection Ordinance of the state of North Rhine-Westphalia, for example, regulates that data collection on paper must also be possible. Business people with the "luca" app can at best ask their customers to enter the data in it.

As is usual with popular apps, since the hype surrounding "luca", new apps have appeared in Google's Play Store that use the same name and do not come from culture4life GmbH. Therefore, take a close look at who is offering the app you are looking for! This is shown right under the name of the app. In some cases, the sole purpose of such apps is to spy on data from your device without serving any useful purpose.

The same applies to the Corona warning app. In the real case, "Robert Koch Institute" is displayed as the publisher: 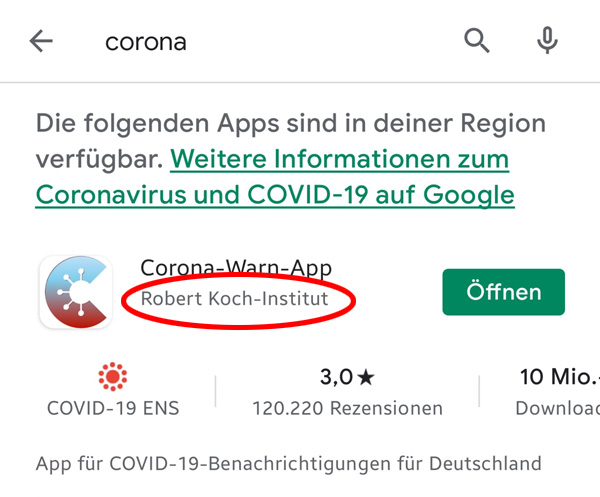 If you don't see a real app when you search the Play Store, there can be various reasons. One would be that your operating system is too old. The official Corona warning app works on Android from version 6, "luca" from Android 5. Another reason could be an activated age restriction for apps. Fake apps usually give 0 as the age limit and then appear in search results if the real apps have a higher age rating. The CWA and "luca" are both available from the age of 0 in the Google Play Store.

This content was created by the joint editorial team in cooperation with the consumer centers North Rhine-Westphalia, Brandenburg and Rhineland-Palatinate for the network of consumer centers in Germany.