What does time-space complexity actually mean?

1. term: Dynamic complexity captures the properties of a system that do not follow direct and simple (i.e. linear) cause-effect relationships. It results from the interrelations and interactions of system elements over a certain period of time. More specifically, dynamic complexity is caused by delays, feedback, accumulations, and non-linearities.

Dynamically complex situations are essentially non-transparent for a decision-maker. It has no way of intuitively grasping the relationships between circular causality and no way of precisely modeling and forecasting them. The decision-maker has to expect surprises, side effects and unintended effects of decisions in different parts of the system. The following figure shows important terms related to dynamic complexity. 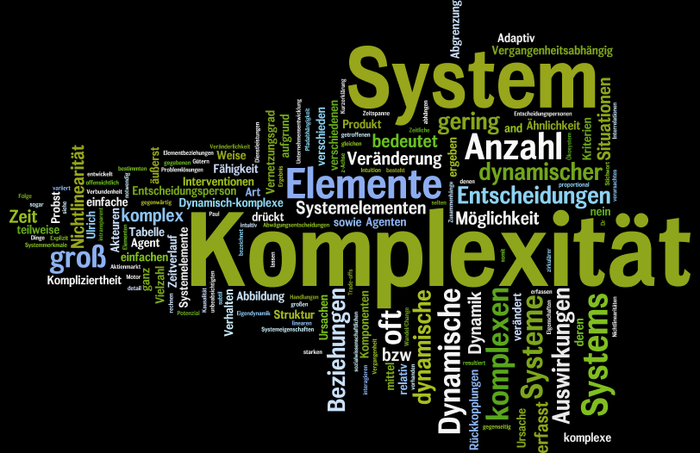 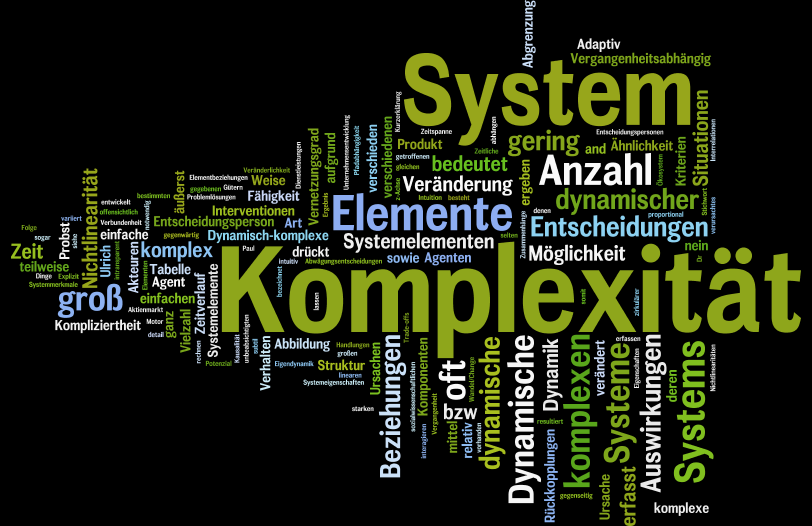 2. Dynamic Complexity Criteria: A system is dynamically complex if the following, but not necessarily all, criteria are met:
(1) dynamics: The system evolves or changes over time. What seems to be immutable varies over a longer time horizon.
(2) Close connection between the system elements: The system elements or agents in the system interact strongly with each other.
(3) Feedback: Systems are regulated by feedback. This coupling between system elements allows actions and events to have an impact on themselves.
(4) Non-linearity: Non-linearity exists when at least one element in the system interacts with another in a non-linear manner; graphically, non-linearity is expressed by a curved instead of a straight line. In particular, “non-linear” means that an effect is rarely proportional to its cause.
(5) Depends on the past: Dependent on the past means that the decisions that an agent has to make depend on the decisions already made in the past. Structure in any system is the product of past actions (interactions) with causal potential in terms of the possibility of future action. The concept of path dependence expresses this thought in a simple way.
(6) Self-organizing: The dynamics of the system arise self-organizing and spontaneously from its internal structure.
(7) Adaptive: Adaptive means that a system changes itself as a result of experience. Thus, the skills and decision-making rules of the agents in a complex system change over time.
(8) Counterintuitive: Causes and their effects cannot be grasped by the decision-makers through intuition. The causal relationships are often not well understood, partly because it is often neglected that causes can have different effects.
(9) Resistant to intervention: The complexity of the system in which an agent is embedded overwhelms its ability to understand it. As a result, the implemented problem solutions in a complex system often fail or even worsen the situation, i.e. when interventions do not produce obvious or unintended consequences.
(10) Timing decisions to weigh up (trade-offs): Time delays mean that in a system the long-term effects on an intervention are often different from the short-term effects.

3. Examples of situations with dynamic complexity: Dynamic complexity is present, for example, when capital intensive investments in production or service capacities are necessary to maintain business activity.

The Stock market has many elements of dynamic complexity with many individual actors who influence each other and thereby generate specific behavior such as speculative bubbles.

There is also dynamic complexity with strong trends such as the Internet of Things.

In the Corporate development For example, topics such as organizational change / change management are dynamically complex.

If companies grow but cannot expand their infrastructure at the same pace, this can lead, for example, to delivery bottlenecks and thus to a deterioration in the quality of products or services. This is often a problem caused by dynamic complexity.

With resources that are used by different actors, e.g. with free goods, destructive behavior results, which are caused by dynamic complexity (see also common resource).

4. Systematisation and delimitation: In the social science literature, a distinction is made between simple, complicated, relatively complex and extremely complex systems. These four system types can be represented in a four-field matrix (see figure), which is spanned by the system features “multitude or diversity” (y-axis) and “change or momentum” (z-axis).

A simple system is characterized by a small number of components which themselves are not subject to any variability. A complicated system records the combinatorial possibilities that arise due to the large number of components in the system and their connection options. This complexity is also known as complexity, detail complexity, or combinatorial complexity. In everyday life, decisions are (detailed) complex when a large number of elements have to be taken into account for the decision. 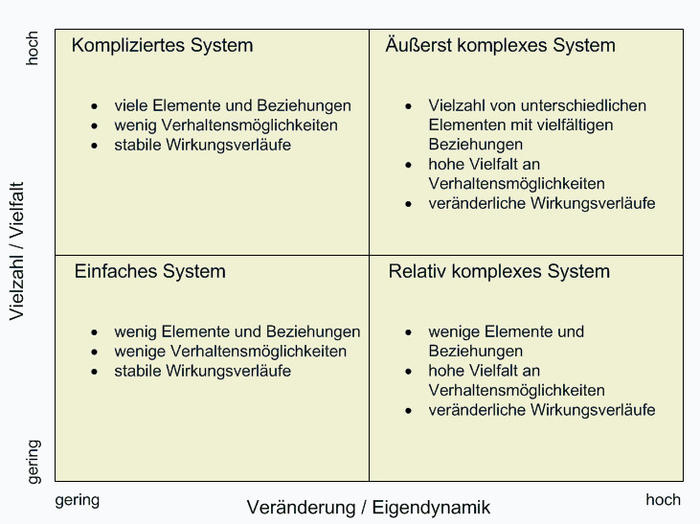 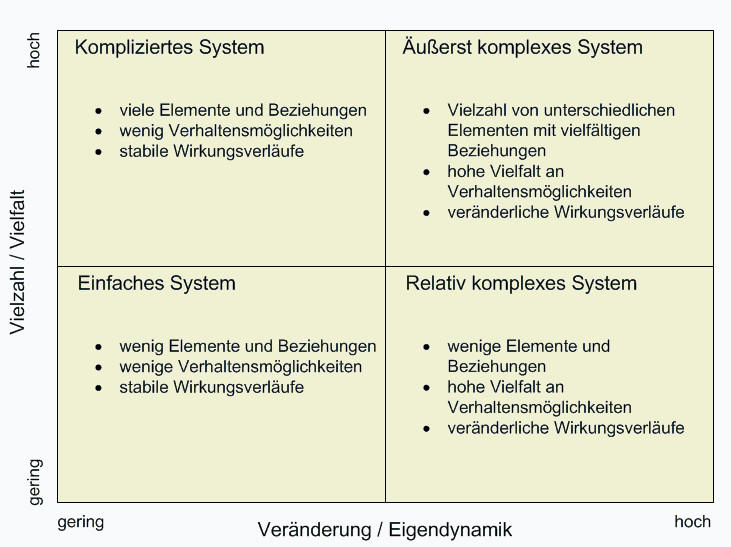 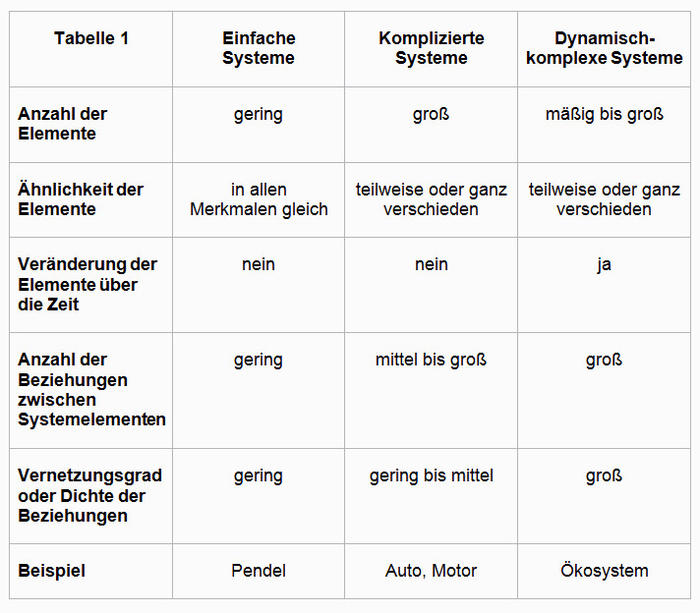 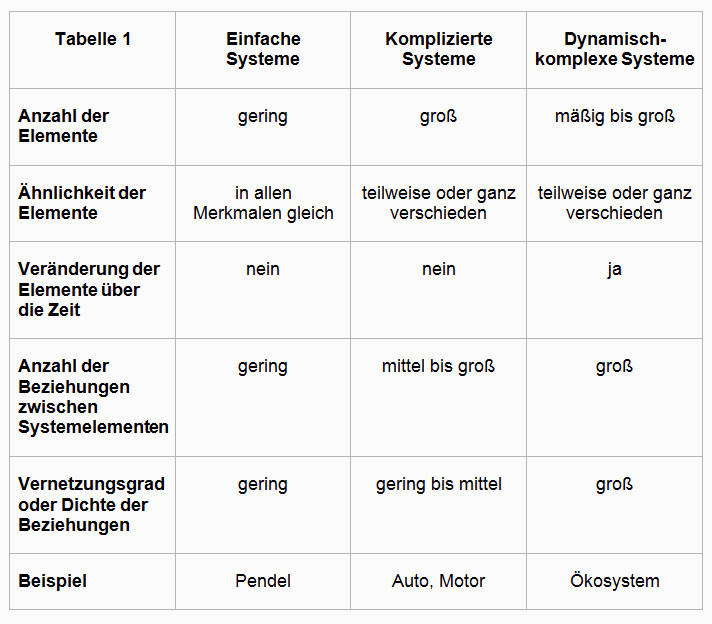