How can I stop being so selfless

You get depth instead of tips.

No doubt, people who try to be selfless and, above all, to live their lives around the expectations of others are popular. And know a lot of sayings and quotes from famous people as justification: "Egoism is the tenderness of the elbows." ((Samuel Taylor Coleridge) or "Everyone has to decide whether he wants to live in the light of charity or in the darkness of selfishness." (Martin Luther King).

But as is so often the case with moral appeals, arguments are only argued in black and white instead of in the sense of both - and.

How is it with you? Which of the following statements do you agree with?

If any of these apply to you, you may be trying to please others too.

Many people are too focused on what other people expect. In a way, that's good, because humans are social beings and depend on others in many ways. However, as with all exaggerations, there are also clear disadvantages that are easy to overlook.

1. You can't please everyone.

A well-known fable by Aesop illustrates this:

A man rides his donkey home and lets his son run alongside on foot. A wanderer comes and says, “It is not right, father, for you to ride and let your son go; You have stronger links. "

So the father got down from the donkey and let the son ride. Another hiker comes along and says: “That's not right, boy, that you ride and let your father go on foot. You have younger legs. "

Then both got up and rode a distance. A third hiker comes and says: “What kind of torture is that, two guys on a weak animal? Shouldn't one take a stick and chase both of you down? ”Both of them dismounted and walked, to the right and left the father and son and in the middle the donkey.

A fourth hiker comes along and says: “You are three strange fellows. Isn't it enough if two people walk? Isn't it easier if one of you rides? ”Then the father tied the donkey's front legs, and the son tied his back legs, pulled through a strong tree stake that stood by the road and carried the donkey on his shoulder home.

Actually, you have known that for a long time. It is impossible to please everyone. Even if you could, there would probably be someone who would not be entirely happy with it - you.

Even the most famous writer, the most famous pianist, the hottest rock star does not manage to please everyone. There will always be several who do not like something. Often exactly what others like very much at the moment.

So what's your life? Just a collection of to-do lists that contain the wishes, ideas and expectations of other people?

2. The expectations of others arise from their view of the world. And that is not "right".

And that is never objective, even if the person presents it as reasonable, rational and the only correct worldview. You learn that when you read the newspaper. Should taxes be increased or decreased in the current economic situation? Good arguments can be found for each side. This would reduce or stimulate consumption. Even the economists have different views on this. There is no such thing as the truth.

Once you have grasped this in depth, then from now on you can also live your "truth". Because it is as subjective as the others. In other words, so wrong or just as right. With the important difference that this is your life - your time, your energy.

3. Whoever tries to please everyone is not automatically selfless. 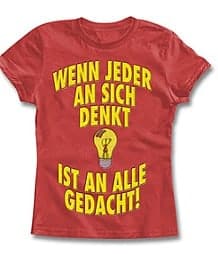 No question about it, people with a "Do it all - driver" are mostly popular. Where other people refuse a request, don't feel like it or simply say “no”, you can rely on people who always want to be nice.

But that comes at a price. Because such people do not do this mainly because they are only noble, helpful and good. One could almost say that they also act selfishly. Isn't that often the opinion of others? About yourself so important that they subordinate everything to it.

Mostly they do it for completely different reasons:

How do you stop that now?

As is usually the case, simple tips are of little use: "Be more self-confident!" "Think more about yourself." "Make yourself less dependent on the opinion of others."

It is important to understand when and why you are doing this.

As always, if you want to change something, it is important to be aware.

Now it's happening! Or even better: “Now I'm trying again to please others.” And to explore curiously and compassionately with yourself what is going on in you. Who are you trying to please right now? Whose approval are you waiting for? What are your fears about what might happen?

This exploration can make you aware that an "old" program is going on in you. Five-year-olds or eight-year-olds want to be good because otherwise they would be deprived of affection or recognition.

The good news: you are an adult. You don't need that special affection anymore. It might be "nice to have". But no longer essential.

Try something new instead of the old program. The following sentences are ways of setting yourself apart from others.

- "I am separated from others."

- "My wishes are just as important."

It is not about repeating these sentences like a prayer wheel in the sense of positive thinking. It's not about reprogramming. It's about a deeper understanding of what is driving you to do something that you don't really want to.

You will learn the most about yourself if you think them carefully or, if you are alone, say them out loud and observe your inner reactions.

By the way: "The love for yourself is the beginning of a lifelong romance", Oscar Wilde already knew.

What are your experiences with it?
What helped you change your behavior?

PS: If you liked this article ... then recommend it to others.
Just down here "Spread the word" click.

... or write a comment.
If you want your comment to appear with your picture, you need a Gravatar!

... or subscribe to new articles by email. Simply left address at