How can I solve this equation

Here you will learn what different types of equations there are and how to solve them. Let's look at this:

Tip: We'll look at different types of equations here, with examples to help them. If available, you will find the links to the article under the respective examples, where the solution is discussed.

In order to be able to solve an equation, one must first recognize what kind of equation it is. Let's start with simple equations and then move on to more sophisticated equations, systems of equations and inequalities.

Very simple equations have signs for addition (+) and subtraction (-). These look like this, for example:

Such simple equations can be solved with additions and subtractions. You can learn how to do this under Solving / rearranging equations.

Linear equations are also relatively simple equations. The highest exponent of the variable is 1, i.e. x1 is not exceeded. Linear equations take the form of the next equation or can be expressed in this form:

Some examples of linear equations: 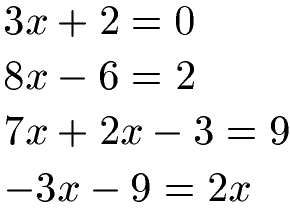 Linear equations can be solved by addition, subtraction, multiplication and division. You can learn how this works by solving linear equations. 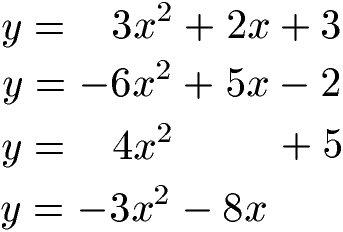 Quadratic equations can be solved, for example, with the PQ formula or the midnight formula (ABC formula). You can learn how to do this under Solve a quadratic equation / function.

With the variable to a power of 1, we have a linear equation. A quadratic equation has the highest exponent 2. If the exponent for the variable is 3, for example 6x3, then it is a cubic equation. The general form looks like this:

An equation has an equal sign (=). In the case of inequalities, there is no such thing as equal, but rather there are smaller, larger, unequal, smaller-equal and larger-equal. Equations can also have different powers. Some examples: 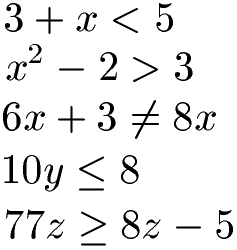 Inequalities can be solved in a similar way to equations. However, there are a few points to consider. You will learn how to do this under Solving inequalities.

In some cases several equations are related. These equations must be solved together. You can recognize this by the fact that lines go over all equations to the left and right of the equations. This can look like this, for example:

Solving systems of equations usually takes a lot of work. As a rule, numerous calculation steps have to be carried out and one should not miscalculate. You can learn how to do this under solving a linear system of equations.

Solve questions with answers to equations

In this section we look at typical questions and answers about solving equations.

Q: How do I know what type of equation I have?

A: First, take a look at the powers, especially the highest exponent. In this way it can usually be seen quickly whether it is a linear equation, quadratic equation, etc. Also see if there is an equals (=) or a sign of an inequality.

Q: What topics should I look at next?

A: For example, we have this content for solving equations: