"I look for happiness in little things"

In Bavaria, old-age poverty is unfortunately very widespread. Christine Krögler from Nördlingen is an example of this. The 67-year-old pensioner tells the VdK-ZEITUNG how she tries to get by with little money. 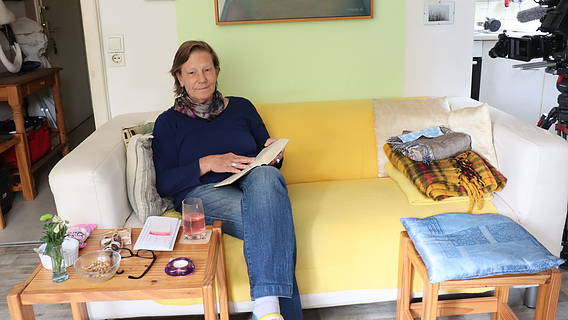 Christine Krögler on the sofa in her small apartment in Nördlingen in Swabia. | © Sebastian Heise

"I really only afford what I need to live." This is how Christine Krögler sums up her answer to the question of how she manages to make ends meet with her low pension. She has 830 euros a month: 770 euros old-age and widow's pension and 60 euros housing benefit. Christine Krögler has to cover all of her expenses, from rent to electricity, heating, telephone to food, household goods, liability insurance and, if necessary, new clothes.

She also has to pay off a bank loan. Fortunately, the VdK member has a social landlady who demands a low rent from her. That helps her a lot, and so she can afford a few minor expenses that she would otherwise have to do without. Christine Krögler goes to the regulars' table once a month, at which a friend usually buys her a drink, and if possible she buys some beautiful flowers for her small apartment in Nördlingen's old town.

But just going out for a coffee or taking her brother out to dinner is not an option for her, and "A vacation has not been possible for a long time". Since she had to sell her car for cost reasons, she always rides her bike to the cheap supermarket outside the city wall to buy everyday items. Instead, she cannot afford to go to the nearby market, she says.

"I look for happiness in little things", says Christine Krögler. She likes to go for a walk, watch the sparrows or have fun in the summer months when the children jump around between the fountains of the fountain at the beet market and try not to get wet. She always wants to make the best of the situation, says the pensioner. That has always been her attitude.

Old-age poverty among women - a film about Christine Krögler 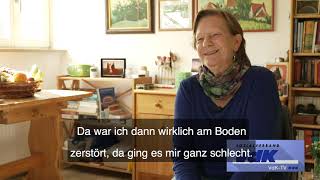 "Of course there are also days when I'm sad"says the pensioner and tells of the blows she has suffered in recent years. It all started with the death of her beloved husband, who died of cancer in 2007 at the age of 59. When it was foreseeable that he would not survive the disease, she came to the social association VdK. At that time she had existential worries for the first time and wondered how she would get by without her husband's income.

For most of her life she worked in the catering industry, often as a freelance or self-employed. Accordingly, she was only able to build up low pension entitlements, and since her husband worked in the same industry, mostly together with her, the widow's pension is also low. After his death, Christine Krögler initially had a job with an advertising paper, which she enjoyed, but which was very poorly paid.

The newspaper was sold at the beginning of 2018 and terminated for operational reasons. She found another job, but developed cancer in August 2018. She felt it was her duty to report this to the employer and was fired during the probationary period. Fortunately, the cancer therapy was successful. Christine Krögler has recovered somewhat from the illness and the setbacks and says: "I don't want to whine at all." But the financial worries remain, even if she is grateful for the recovery. She makes one thing clear: "Enjoying old age is something completely different."