What is Erdogan's achievement

When it comes to misogyny, Erdogan is now in front of the Catholic rulers of Hungary and Poland, who have not saved in the recent past with attacks against women. In January the right-wing national anti-European party "Law and Justice", which ruled Poland, banned abortion even if the fetus was born seriously ill. Hungary had already signed an anti-abortion declaration last year.

The new misogyny comes in a package: apart from them, homosexuals, bisexuals and transsexuals are expressly excluded from special protection. In Poland there are a number of counties and cities that have declared themselves "LGBT-free zones". People with an orientation other than heterosexual are not welcome in these places. It is a sad return of history that in Poland, which was attacked by "Jew-free" Nazi Germany, people are now being disgustingly stigmatized and declared outlawed. Erdogan doesn't want to look like a wimp: he reiterated the statement of the country's highest religious official, who said in a sermon at the end of April last year that homosexuality was the reason for the outbreak of the corona pandemic. 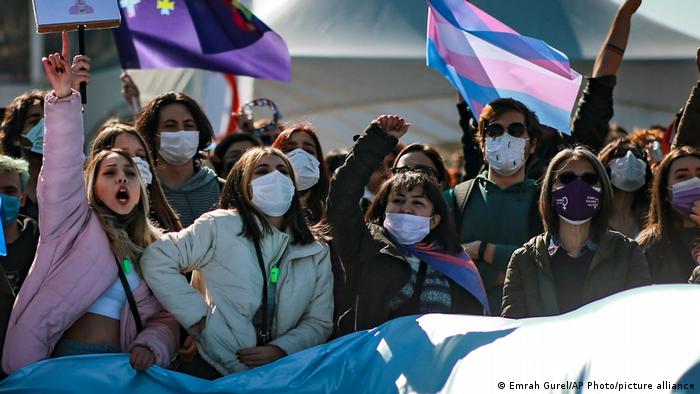 With his misogynistic politics Erdogan wants to protect himself politically in the conservative and Islamist camp.

You have to call it all what it really is: terribly stupid. But that's not all. Because the autocrats in Ankara, Budapest and Poland - Turkey, Hungary and Poland are nominally democracies, the latter two members of the European Union - are pursuing a common agenda that the free world cannot be indifferent to. It is easily explained in a nutshell, and Erdogan's political biography exemplifies it very well: he also won the local elections in 2004 by styling himself as a "brown Turk". He wanted to break the hegemony of the "white Turks", meaning the Kemalist, secular elite in the military and in politics. A strong man, alone against the establishment, for the people, against the elite at home and abroad - since then the world has seen several reruns of this populist thriller.

The Western community of values ​​as an enemy

In the countries nepotism and kleptomania take the place of comprehensible, open processes, of performance and ability. Of course, you don't want there to be - legally or otherwise - opportunities to be forced to change your behavior from outside. That is the reason why Poland and Hungary oppose the rule of law mechanism of the EU.

Turkey will never belong to the European Union like this, and Erdogan has not wanted that for a long time. But not only the EU is a community of values, but also NATO, of which Turkey is a member. The fact that the White House severely criticized Turkey's withdrawal from the Istanbul Convention shows that developments in the country are shocked everywhere in the free world.

Populists like Erdogan can only exist politically by presenting their voters with enemies who make them a scapegoat. This is their resentment-laden substitute for real politics. Poland has now announced a "Warsaw Convention" that will ban abortion and marriage for same-sex people. So it won't be long before more gruesome news comes from Hungary and Turkey: The wheel of resentment and denigration has to keep turning.

Alexander Görlach is Senior Fellow of the Carnegie Council for Ethics in International Affairs and Senior Research Associate at the University of Cambridge at the Institute for Religion and International Studies. The PhD linguist and theologian was also a Fellow and Visiting Scholar at Harvard University from 2014-2017, and a visiting scholar at the National Taiwan University and the City University of Hong Kong from 2017-2018.