The Samsung Galaxy S4 is without question a great Android smartphone. The HTC One that we recently tested also offers powerful hardware and excellent workmanship. These and other top smartphones currently cost around 600 euros, sometimes even more. Not everyone can or wants to spend so much money on a smartphone.

For those who still wanted to get a very well-equipped phone, the LG Nexus 4 has been a good choice, at least so far. At a price of 349 euros, the Google smartphone offers features that are usually only found in much more expensive top-of-the-range devices. With only half the storage space, the device can even be had for 299 euros. 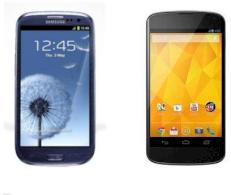 Comparison: Nexus 4 and Galaxy S3
Photo: LG, Samsung / Montage: teltarif.de Anyone who has considered purchasing the LG Nexus 4 will probably now be faced with the decision of whether to buy the Samsung Galaxy S3 instead. Because the prices for the previous top model from Samsung have fallen significantly since its introduction last year - the 16 GB version of the Galaxy S3 is currently also available from around 350 euros.

But which of the two devices offers the more attractive overall package? To answer this question, we took another look at the Samsung Galaxy S3 and the LG Nexus 4 and compared them with each other.

In comparison: display and workmanship

The LG Nexus 4 measures 133.9 by 68.7 by 9.1 millimeters. In addition to the 136.6 by 70.6 by 8.6 millimeters Samsung Galaxy S3, the LG Nexus 4 appears to be much more manageable and at the same time better processed. On the other hand, the Samsung smartphone is around 6 grams lighter than the Google phone at 133 grams.

In contrast to Samsung, LG has dispensed with physical controls such as the home button and the back button under the display. The Android status bar on the Nexus 4 offers these functions instead. However, this reduces the effectively visible and usable display size of 4.7 inches, which is already 0.1 inches smaller compared to the Samsung Galaxy S3.

If you can get used to the slightly smaller display of the Nexus 4, you will be compensated for it with a better display, the resolution of which is 768 by 1280 pixels and which has three sub-pixels per pixel. This feature ensures a sharp display compared to the Super AMOLED display of the Samsung Galaxy S3, which works with only two subpixels per pixel. In addition, it has a resolution of 720 by 1280 pixels, which is a bit lower than that of the LG competitor. The displays of both phones are well protected against scratches thanks to the use of Gorilla Glass.

Nexus 4 has a slight edge in terms of performance

Nexus 4: Homescreen
Photo: teltarif.de One of the most striking differences between the LG Nexus 4 and the Samsung Galaxy S3 is the size of the RAM. At 2 GB, this is twice as large on the LG smartphone compared to the Samsung device.

The difference in the speed of the CPU is less noticeable. But here, too, the Nexus 4 is slightly ahead, as a different quad-core CPU than in the Galaxy S3 is used. While the processor cores of the Galaxy S3 are clocked at 1.4 GHz, the clock rate of the Nexus 4 is 1.5 GHz. Thanks to the Adreno 320 GPU, the Nexus 4 also offers more graphics performance compared to the Galaxy S3, in which a Mali 400MP GPU works.

The difference in performance between the two devices due to the use of different hardware is definitely measurable. The LG Nexus 4 is regularly ahead of the Samsung Galaxy S3 in benchmark tests.

Our comparison continues on the next page. There we show you which of the two smartphones performs better in terms of storage space and battery life, as well as our conclusion.