Who made the film Armed

Gabriel (Dave Annable) is the brain behind a new kind of artificial intelligence that helps the military to find out the truth during interrogations. The successes are groundbreaking but after a personal tragedy, Gabriel withdraws completely. At least until one day his friend Isaac (Wesley Snipes) stands on his doorstep and explains to him that there is a problem with his machine and that they need his help.

Together with his old friend Riley (Anne Heche) and four other men, the troop therefore set out to find out what went wrong and why the team on site no longer reports. Once there, they soon find the bodies of the stationed team and are suddenly in the awkward position of being locked up. In addition, a seemingly invisible enemy is up to mischief here ... 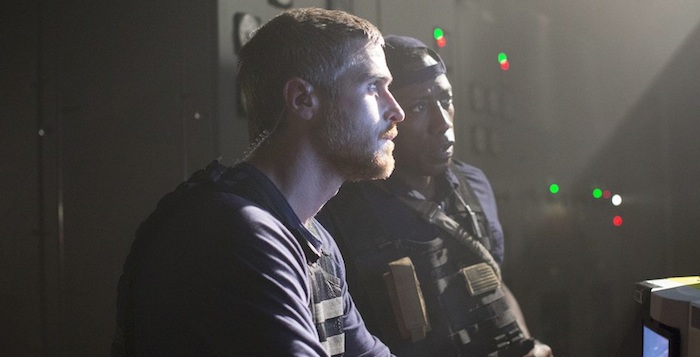 "Armed Response" is a film produced by Erebus Pictures, on which WWE Studios and Gene Simmons worked together. Here again a wrestling star can celebrate his debut in a feature film, namely Colby Lopez alias Seth Rollins. Directed by John Stockwell (In the Blood), who recently shot Countdown for the WWE studio. Who is supposed to be the real star of the film and who it is then can be argued about, but I'll come back to that later.

Visually, the film is very successful. Sharp images, rich colors and, in addition, the recordings from a bird's eye view, that already creates a certain dynamic. Then the use of the "cold gloom" of the walls of the former prison in which the action takes place. This first half is still exciting and scary in places, because neither the audience nor the protagonists know exactly what is being played here. Then comes the resolution that I had a problem with.

ATTENTION SPOILERS: While the interrogation methods are still effective and credible, artificial intelligence has evolved to lure everyone involved in a massacre. These are then eliminated one after the other by the AI ​​= the building. If memories came back to life, it doesn't really matter to the mind in the machine. What is much worse is that suddenly all but one of the guilty parties switch from rescue misson to killing command without transition in order to cover their tracks. That comes out of nowhere and is incomprehensible. SPOILER END

Only Gabriel is a “real person” here and that only thanks to the actor and not because of the script, all the others are just decals. That's how they are played, which doesn't make things any better. The fact that the deaths turn out to be somewhat gruesome in places doesn't change the fact that it doesn't matter who dies. At most, you are happy with some of them, because they are quite unsympathetic or angry. As with any film, it's very bad when you (almost) don't like any of the characters.

Which brings me to the opening question. From the studio, Seth Rollins is expected to star. The cover and trailer prominently advertise Wesley Snipes. In reality, Dave Annable (Yellowstone) is the real heart of the film. The tragedy behind his character doesn't matter to the film, but it works very well as a moral compass and has a few cool moments as well. Unlike Wesley Snipes. He plays his part with a facial expression without highlights.

After his jail time he probably needs money again, but after his return to Expendables 3, I thought he would still enjoy his job, but apparently I was wrong. Seth Rollins has a strong physical presence and is allowed to be a real ass here that he then has to face the much smaller Anne Heche several times, but is a little ridiculous. Like Snipes, Heche (Wag the Dog) is also a “relegated girl from the world of cinema”, she is not bad as Riley, but somehow I haven't bought her development.

What remains is a very respectable first half, including a few nice tricks, moments of shock, gore effects and a little tension in the air. It then disappears very abruptly and then you just wait until all these idiots, who are only concerned about their own skin, have finally blessed the time. No great choreographed fights, no cool sayings, there simply nothing happens that would stick out of the uniformity of similar productions. A conciliatory conclusion at the end: If even Mister Bruce Willis can still do it if he wants, then I still have hope for Mister Snipes.

“Armed Response” gets 4/10 from me, the machine gets recommendation points that are preferable to people in any case.