What are listeria symptoms

Listeria are bacteria that are found practically everywhere in our environment. The pathogens are usually harmless to healthy people. However, people with weakened immune systems, small children and newborns can become seriously ill.

Fatal Listeriosis cases scared consumers almost a year ago. Twenty-four French people fell ill, seven of whom died, probably because they had eaten contaminated meat pies or other meat delicacies. This year two German supermarket chains called Harzer-Käse and Teewurst back because Listeria were discovered in their products. However, no diseases were known.

It was not until the early 1980s that scientists found reliable evidence that infections with Listeria monocytogenes can be transmitted through animal, but sometimes also plant-based foods. The germs are widespread in our environment and can be found in all raw foods. Meat, poultry, fish and marine animals as well as raw milk products are particularly affected. Subsequent contamination is possible with heated products such as boiled sausage or cooked ham. Listeria have also been detected in fresh vegetables, especially pre-cut salads. They have the ability to multiply in an oxygen-containing atmosphere as well as in an oxygen-free environment, i.e. also in vacuum-packed foods such as boiled sausage or smoked fish. Heat kills the pathogens: at 72? C they are destroyed in milk after just 15 seconds. Because meat has a different consistency and conductivity, it takes several minutes here. 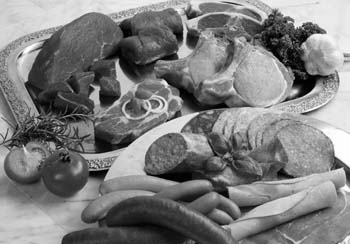 In healthy adults, one runs Listeria infection mostly harmless. If the number of germs ingested is very high, inflammation of the small intestine can occur, which usually subside on its own. As a rule, however, the symptoms are harmless and resemble those of the flu with fever, body aches, diarrhea and vomiting. However, the authorities around the world keep registering deaths from listeriosis.

Infants, toddlers, the elderly and immunocompromised people such as those who have recently been operated on, diabetics, cancer patients or AIDS sufferers are primarily at risk. In these risk groups, the bacteria can cause meningitis (meningitis) or blood poisoning (sepsis). Such severe cases are about 30 percent fatal. The incubation period, i.e. the duration from ingestion of the pathogen to the onset of the disease, can be between one and 70 days for this form of listeriosis. On average, it is about three weeks.

Pregnant women usually show no symptoms or only flu-like symptoms. However, they can pass the infection on to the fetus. The baby may be premature or stillborn, or the child may be born with life-threatening congenital listeriosis. Newborn listeriosis is one of the notifiable diseases in Germany. Around 30 to 40 cases are reported each year. From these reporting results, the actual number of illnesses in the population is estimated at around 200 cases per year. That corresponds to two to three diseases per million inhabitants. In order to be able to better assess the spread of infections, doctors will in future also have to report pathogens that they have detected in the blood, cerebrospinal fluid or swabs of newborns.

Microbiological studies show that foods are quite often contaminated with Listeria. Individual products such as vacuum-packed cooked ham and smoked fish were particularly often affected with 14 and 8.5 percent respectively. However, the number of germs is predominantly below 100 colony-forming units per gram of food (CFU / g).

Although quite a lot of foods contain the pathogen, listeriosis rarely occurs compared to other food infections. The minimum infectious dose (MID) at which the pathogens trigger a disease is unknown. Experts assume that a relatively high number of germs is necessary. To do this, the food must already contain a large number of pathogens or the bacteria must have the opportunity to multiply during storage.

How many Listeria germs can be tolerated?

There is no binding limit value from which Listeria number of foods can no longer be sold in Germany. In Austria there is a "zero tolerance", that is, products are withdrawn from the market as soon as Listeria can be detected. Experts around the world are currently discussing an assessment value that classifies products as harmless to health. According to the Federal Institute for Consumer Health Protection and Veterinary Medicine (BgVV) in Berlin, a number of 100 germs per gram or milliliter of food should apply, which must not be exceeded until the end of the best-before date. A value of 102 CFU is being discussed internationally. More recent outbreaks of listeriosis show that an infection by food was only triggered from these bacterial counts.

Listeria are widespread in the environment and can also be found in mud or on plants. Numerous animal species such as cattle, sheep, goats or poultry can become ill. Apparently, the stress of factory farming increases the susceptibility of the animals to the pathogens. Farm animals are often infected through insufficiently acidified silage feed, in which the listeria can multiply on the surface.

Errors mostly in storage and preparation

The transfer to food can take place at different stages of extraction and processing. In particular, food of animal origin such as milk and meat can be contaminated during milking or slaughtering. For example, it cannot be ruled out that the raw milk of raw milk cheese is already contaminated with Listeria. In the case of cheese made from heat-treated milk, the bacteria are killed if pasteurization is carried out properly. However, due to poor hygiene in further processing, the products can be contaminated again. This applies not only to cheese, but also to other animal and vegetable foods. Examples of poor hygiene are unclean machine parts in the manufacturing plant, poorly or infrequently cleaned slicing machines in retail or deficiencies in the personal hygiene of employees. In some cheese dairies and fish processing companies, listeria occur again and again. The bacteria are feared there as so-called house germs because they can occur anywhere in the company due to their ubiquitous distribution. Technical errors in storage and preparation in the home kitchen can also be the cause of the multiplication of pathogens and infections.

Sour pickles are free from listeria

Whether the Listeria can survive and multiply in food depends on the technological treatment and the manufacturing process. Cooking, frying, sterilizing and pasteurizing kill the bacteria. In foods that contain little water, a lot of salt or preservatives or are very acidic, such as sauerkraut, mixed pickles and yoghurt, an increase is only possible with a delay or not at all. Listeria have good growth opportunities compared to competing germs with a reduced oxygen supply, e.g. B. in vacuum-packed scalded sausages or smoked fish and for long storage times of refrigerated food. The pathogens can still grow even at temperatures of up to +1? C. Other germs have long since stopped their activity under such conditions.

Listeria: there is always a risk of infection

For the reasons mentioned, some foods can be expected to contain listeria. Infection cannot therefore be prevented with complete certainty. However, the risk of infection can be reduced if consumers, especially people with weakened immune systems and pregnant women, follow a few important rules.

How to prevent listeria infection

This article is taken from the UGB archive.

We would like to point out that the content may have to be re-evaluated due to new scientific findings.
<?